Today’s open stage had 3 musicians and a full room . It’s certainly grown over the week and is definitely something people want. Improvisers, like all junkies, need their fix. 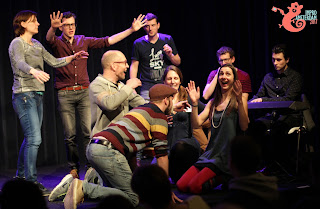 The first half of the main show was Midnight Radio, a format devised together by Emil Struijker Boudier and Sarah Michaelson despite being several thousand miles apart. If you don’t know who these people are, let me get all wikipedia on you. Emil is an Amsterdam-based improviser most known for taking the art of tech-ing improv shows up to 11. He was the main tech of easylaughs before the pirate ship Boom Chicago kidnapped him one night. Sarah is also known as DJ Mama Cutsworth and provided the soundtrack for several shows this festival, most notably with the mostly-Colombian group Picnic, of whom she is the non-Colombian part. 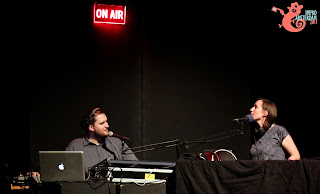 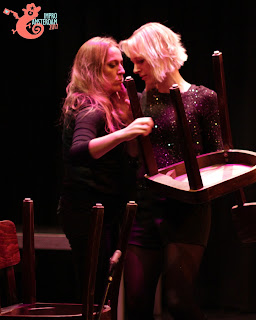 It was a really nicely different show. The premise is that there is a midnight call-in radio show hosted by the above mentioned two (and really, there should be). The rest of the cast call in in character and request a piece of music, which, Spotify-permitting, is played. The music is then played and used to inspire or provide the soundtrack for the scene. And then another caller.

Again this was a vehicle for some great scenes, and some lovely callers. And there was a genuine feel of two DJs who have been together for ages despite having met the previous weekend. But this is a theme of the festival. By Friday, you have a strong cast of players who you would swear all knew each other since Jesus was a young improviser.

Felipe’s puppy stole the show. But there were plenty of other good moments. It started with a super-strong wordless scene with Dave, Roemer and Victoria acting out the classic boyfriend finds girlfriend flirting with another guy and bullies him out of money so that now boyfriend has all the cash, so girlfriend leaves with him. There was an interesting, almost surreal scene of a woman harvesting hearts that lead to what is possibly the call-back of the festival when Marta returned to collect a broken heart in the final scene. 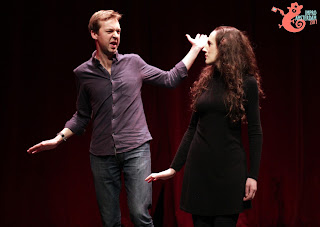 The show was followed by British duo, Folie à Deux. Yes, I know it’s French. After Brexit, they will have to be called “You don’t have to be mad to be in this duo, but it helps,” which is not nearly as catchy.

Charlotte and Andrew are clever, good actors and have a ton of chemistry. There is much wit on display and they take their time to explore the world and the characters, plus find some games to play on the way. Returning to stories always sees them moved on nicely. The doomed romance between a hotelier and the only guest in the One Season Hotel was a particular joy to see unfold. 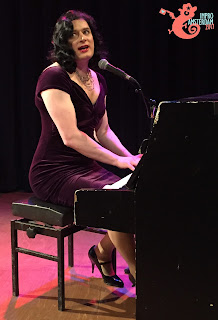 At this point in my notes, it says “Nele is great.” No one can argue with that which is why I wrote it exactly as she said.

I rounded off the night in the company of Phil Lunn, whose show centres around a female cabaret singer who has been around the block. She tells us about her life (with much help from the audience) and then sings songs inspired by those events with titles from the audience. The songs are great and the life story, from humble beginnings to present day, provides a nice arc.
Posted by Peter More at 21:05