Every year just before the start of the IMPRO Amsterdam festival proper, there is a sneak preview show where the teams playing at the festival perform for the organisers, volunteers and other members of the organisation behind the festival, TVA.

For those of you who don’t know, TVA is a sort improv academy / social club providing classes for all levels (from beginners to yellow (yes, the levels go all the way to yellow)). It started the festival long ago before many of you (us?) even knew what improv was (before some of you could even string the words “yes” and “and” together, I'll bet), so that they can invite groups from around the world they wanted to see and learn from. The founding principles still remain, but after 20-odd years the festival has grown and become as close to a well-oiled machine as any festival can be. 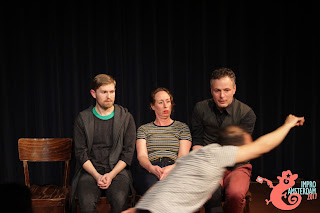 The sneak preview is a chance for the cast to warm up before the week and also to thank all those people who helped make the festival happen. We were treated with two sets of musical-inspired montages. A montage in this context is a sequence of seemingly unrelated scenes (which I might make the title of my first movie). Obviously nothing in life is unrelated - we are all connected by his hallowed noodly appendages - and an audience will find the hidden connections. What I enjoyed most about the show was seeing great players giving themselves the time and space to build great scenes. Players who yesterday were not a team. In fact many had not met before that day. 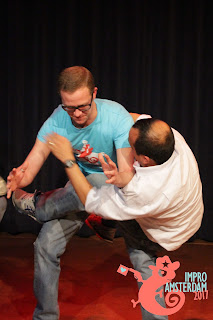 The scenes that emerged were sometimes amazing. There were a couple that turned out to be super dramatic: something that does not happen in improv so much at all, but shows how it’s not simply a medium for comedy but a method to create any form or style. Most notable was the tear-jerkingly realistic goodbye scene between Patti Stiles and Paul Dome. 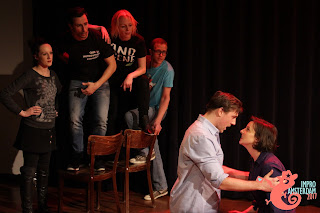 What was also great about the show was already getting a chance to see some of the differences in styles that players from different backgrounds and places bring. There is a nice mix of players and they already feel like a team. It bodes well for the rest of the fest. 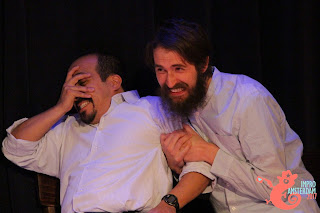 Last night’s interviews (for which you might read “conversations I drunkenly stumbled into”) included a promise that Patti Stiles, Charlotte Gittins and myself made to solve all of the world's problems - more on this later in the week; and having Will Luera explain how improv is basically physics. There is too much information to go into in one simple blog - you’ll have to take his workshop on the subject or read Stephen Hawking’s "A Brief History of Improv." 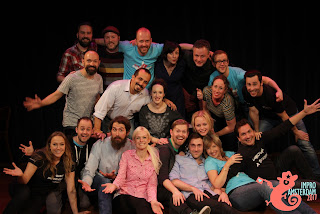