Ego and the Naked Improviser

Improv is walking a tightrope. It is sticking your head in the lion’s mouth. It is charging into battle with only a pen knife.

It is all of these things. Metaphorically.

Improv is hard and prone to failure. In fact, it's a common improv expression to say if you aren’t failing, you’re not really trying. Especially in rehearsals where we can really push and find the limits of ourselves as players, of the group and of improv as an art form. (Hint: improv has no limits as everything we do is in the imagination, not only of the performers, but also of the audience.)

The fear of failure is a response of the ego. The ego is that part of us that wants us always to look good. It’s the part of us that objects to anything it can perceive as a criticism. The part that doesn't want us to try anything too risky. It’s the very antithesis of improv. The ego is all like, “screw you guys, I need to feel safe.” Improv is “let’s jump into the danger together.”

Even experienced players can get in a rut; finding themselves comfortable within a limited set of characters, moods, genres, etc where they know they can always do well.

Ego-driven players are sensitive to feedback (always seeing it as an attack no matter how it’s presented), play within a set of boundaries, pre-plan, resist change and may well go for the jokes every single time even if the mood of the scene is something other than jocular.

Unfortunately, such performers are often rewarded by audiences. Their safe choices and concentration on immediate reward (such as laughter) means they can be more entertaining than those who are pushing themselves. Certainly in the short term. It’s only on repeated viewing that the audience might weary of seeing the same thing. Although, having said that, audiences like repeating characters. It’s the cornerstone of sketch comedy, Commedia dell'arte and most famous comedians.  But it is the opposite of “theatre from nothing,” of creating scenes from the here and now.  In fact, any form of pre-planning heads to an area where you really are better off writing the damn thing, rehearsing it and making it the best it can be.

Now, of course, a person's personality will come out on stage. It appears in the choices we make, the way we approach and portray our characters, in the types of story we tell and the way we tell them. It gives nuance to what we do. But this should not get in the way of the story the group is trying to tell at that moment. There is a big difference between choices guided by personality and control exerted by a scared ego. The former makes what we do distinct, unique and boundless; the latter makes it staid, formulaic and limited.

I’ll post soon, hopefully, about methods of trying to get rid of your own ego in performances. The biggest and most effective step, I think, is to realise it’s there in the first place and that it’s not helping you.

Labels: Ego, Failure, In the Moment, The Actor

King Lear in the style of Edward Lear 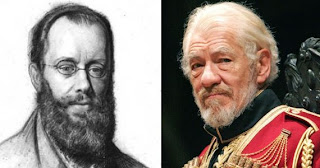