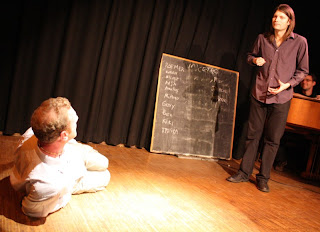 When being shot in a story, there's a simple formula to tell you whether you should die. It very much depends on your character's place in the story and what that story needs right now. But in general:

"A character not accepting a gift is not necessarily a block."

For beginners who are still learning the key improv skill of accepting, I would say take every object another character gives you. And in the start of a scene, 99% of the time you will take whatever the other character gives you unless you immediately have a good justification for why your character wouldn't accept it from them. But later on in the scene... there will be times when not taking the object is accepting the offer and/or agreeing with what has been set up.

For example, Erik has an ice cream stand. He wheels it back into the village he grew up in and encounters his brother, Stefan, who has never forgiven him (for something not yet revealed). Erik offers Stefan an ice cream to placate him and he refuses it. This is not a block. This is perfectly in keeping with the situation that has been set up. The fact that an ice cream was offered has been accepted, even if the ice cream itself wasn't. And Erik didn't expect the ice cream to be taken, either.
To take the ice cream would be to prematurely defuse the situation. We want to heighten the tension, understand where it all came from and then resolve it. Only then should the ice cream be taken, making a great end which would not have been possible had the ice cream been accepted earlier. The ice cream in this case can be seen as a metaphor for (or symbol of) forgiveness. And that is very satisfying to an audience even if they don't consciously realise the connection.
Posted by Peter More at 22:29 No comments:

Impro Thought of the Day: Don't let the fact that you can justify anything allow you to not pay attention

Good improvisers are very adept at justifying mistakes and so covering up lapses in concentration. Don't let this fact allow you to become complacent about paying attention and become happy with these mistakes. Whilst a scene like this can still be good, it'll never be awesome. Make awesome your goal.