As a semi-professional academic of various performing arts, I have had much time to muse on one phenomenon that all performers have experienced no matter what their discipline:


Time on stage is different to time in the audience.

It is the clearest example I have encountered of how relativity can be experienced by us. 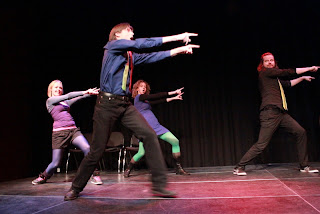 The performer can be seen as being a moving object and the audience at rest. And performing is somehow equitable to travelling near the speed of light. Obviously, not exactly in physical spaces, but most performances are a journey along a story line, or through a fixed set of games, routines, sketches, songs, poems, ideas or points.

This analogy makes it clear that it is only natural, given Einstein’s assertions, that time experienced on stage is different to time experience off stage.

But it doesn’t fully explain how this experienced time can vary so wildly from performer to performer, from performance to performance and from different points within the whole performance. Obviously it depends a lot on the adrenaline in the performers body and the focus he or she has on it. Adrenaline speeds up the heart rate which has the tendency to make the outside world slow down. It’s the reason when you’re in a car crash or something similar, you often see it happen in slow motion. Focus on something has the opposite effect. Many of us have experienced the same effect off stage, where we’ve been so engrossed in something we haven’t noticed that it’s now the middle of the night hadn’t there been plans for dinner.

So the balance of these two opposing forces cause radical shifts in time-perception as we travel from the start to the end of a show. Had I time and a grant I’d love to measure both throughout a performance and also somehow record the performer’s idea of time. But I have neither. One day I will find the time enough to do some google searching to see if someone has already done it. But not until I get a grant.

I would also love to derive from this a comedy equation, an E=mc² for comedy relativity. Some of you might have noticed that even this equation shows that the energy of the room is that of the MC, squared. [1] Or that it is dependant on the mass of the comedian and the comedy constant c. C, in the old days of BBC radio, used to be known as the “speed of light entertainment.”

Enough silliness. Certainly, I do believe there is an equation that could be found using values for focus and adrenaline to calculate perceived time, but it probably wouldn’t actually help anyone to know it. Experience is definitely the best thing to be able to circumvent this problem. Experience not only allows you to control your focus and adrenaline levels but also allows you to be able to perceive or estimate audience time more accurately.

Labels: Comedy, In the Moment, Theories

Off to teach a class about improv singing, which was a good time to remind myself of the top 3 things to do in an improvised song...
You'll notice rhyming doesn't even make the top three. 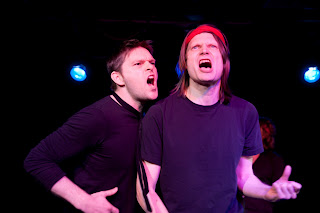 For a longer list of tips I made 3 years ago, see here: http://improblog.mrpetermore.com/2010/03/fifteen-facts-about-improvised-singing.html

Talking about someone outside the scene

A general guideline in improv is to not spend a great deal of time talking about someone outside the scene. This is again one of those great guidelines to reinforce when people are learning when the tendency will often be to talk about stuff happening elsewhere.


“Oh, I wish Jack was here. Jack’s great. He’s got that funny hat and always has a joke. He’d make it fun.”

Obviously, this is clearly a call for Jack to come on and save the scene, which is usually what will happen. But while the description is happening, it’s not so interesting because Jack’s not there. If the actors had talked more about their relationship it would not only be more engaging but also we’d have no need for Jack.

Improv does best with the “show, don’t tell” principle, so talking about Jack is not as interesting as having Jack there.

There are always exceptions. Sometimes you wish to endow characters who aren’t there or follow up a storyline we know we won’t see again. Then we can permit a little talking about characters. And then there are the times when talking about another character is done to illustrate the relationship on stage. Such as two siblings talking about which of them loves their mother more. Although both are mentioning their mother a lot, it’s really about their one-upmanship not the mother. Similar situations are two friends one of whom stole the other’s girl- or boyfriend; two X-factor finalists who both lost out to a rival; two employees with very differing opinions of their boss.

It becomes clearer to explain if you substitute the person for an object. Take the two friends one of whom stole the other’s girl. If it wasn’t a girl, but a car that was stolen, the scene could proceed very much on the same lines. But even then, it would be better if the car was there because the actors could use the physicality of the car to help them find and express their emotions.

So if we make it something more abstract then I think it is even clearer. If what was stolen was leadership of the book club, for example, then we see the function this third person. And although the emotions attached to the object might be slightly different, the scene is still about betrayal and possibly rivalry. And in this version, it makes it clear the scene could be seen as being about status.

So in short, there are times when discussing someone outside the scene is fine. As long as it doesn’t become simply a long description of this other person and their antics, and remains ultimately about the relationship between characters there on stage.
Posted by Peter More at 03:17 No comments:

No updates to this blog for a while due to travel and other such things. By way of compensation, here's an event I'll be performing at tonight as part of the Chicago Improv Festival. I'll be doing a short Film Noir set with Mischler and More and then joining other improvisers from all over the planet in a jam. Or as the Americans call it a Jelly.
Posted by Peter More at 21:19 No comments: