I've heard it been said that the Rom-Com is a hard genre to improvise. I think partly because we're already doing comedy, so it's hard for the same reason the genre of Comedy is hard to improvise. Plus the only difference between a Romantic Comedy (Rom-Com) and a Regular Comedy (Reg-Com) is that the theme of the story is more restrictive. In a romantic comedy story revolves around the love life of the protagonist(s). If you see one funny scene, you can't tell if it's from a Rom-Com or a Reg-Com unless it's the scene where the couple meet or where they get together.

So, to do a scene in the style Rom-Com is to dictate, to a certain degree, what happens. That on top of the problem with doing a scene in the genre of comedy, which is effectively to say "do a scene, but it MUST be funny." Pressure!

So I've been thinking a bit about the Rom-Com lately and even coming up with a structure (or rather a path) to improvising a full one. I'll let you know later what comes out of it, but it's nearly there. But, it seems if you understand a few basic rules about what makes a Rom-Com, and what it is people enjoy about them, you should be able to steer your way through one.

Of course, the Rom-Com journey can very easily be seen as a classic Hero's Journey, in which the thing the hero is searching for (knowingly or not) is Love and he or she has to give up a lot or face great strife to get it. But in doing so he or she becomes a better person and makes the world a better place. They are often very much like quest movies because Love is so often treated in them like a mystical, magical force. A force which the hero often fights against but is ultimately swept along by. A force which guides his or her destiny.

A couple of things have helped me understand this genre a lot more: one is watching a few of them; the second is the excellent book Writing The Romantic Comedy by Billy Mernit.

Billy Mernit also has a blog and recently he listed 5 Rom-Com Truisms. They apply more to writing, but they are interesting to note, and some are directly applicable.


If I was to recast these for improv, I would state them as follows:
Now I'm not a huge fan of the genre in itself, but like any genre, the best films in it transcend that genre. Plus, all it is really is a broad subcategory of the genre of Comedy with all films linked by a common theme. A theme that is featured somehow in 95% of all movies, regardless of the predominant genre.

See also: the Genre Guru Genre Guide to RomCom.
Posted by Peter More at 13:22 No comments:

Transitions Workshop and the Movie Paradigm

I recently attended a workshop on transitions given by Tim Orr of longform trio 3 For All. It's a topic I'd covered with him before as part of a broader workshop, but one well worth revising. Especially as it is something I feel I've underused in the year and a half since the earlier workshop. Transitions are the moving from one scene to another, one location to another, one time to another, or one beat or sequence to another. So as well as the usual "edits" there is a whole bunch of other techniques that can be used not just between scenes but also during scenes. This includes techniques for performing multiple scenes at the same time, even in the same physical space. 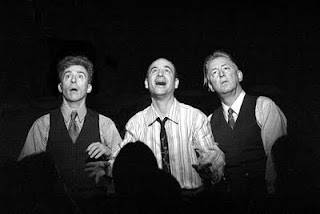 Tim's mantra is to always ask "how we can make the current scene as magical as possible at any moment?" It's a great approach and is so much better for making wonderful scenes than the common mantra of "how can I be funny right now?" His approach, although he always talks about making improv more theatrical, is actually to make improv more like movies. This is definitely where my thinking is these days. Movies are the things we should have in mind when making improvised stories. Theatre has so many limitations – certainly in terms of making spectacular things happen – whereas in improv, where the set, props and costumes are all made out of the imagination of the audience, we are actually much, much freer to make anything we want happen. And I do believe anything can be made to happen. There is always a way to represent any situation or at least part of any situation. We just need to imagine how it could be done and to get everybody else on board with it. This is obviously not a simple task, but it is achievable with a group of people who are ready to let their imagination move beyond the confines of the stage, are prepared to take the risk and who are really, really working together.

I will certainly talk a little more about transitions in the future, but if you really want to learn about them, go take Tim's workshop.

Dissolve to www.3forall.com
Posted by Peter More at 09:45 No comments:

The Three Pillars of Acceptance

Improv is basically about two things – acceptance and building on that acceptance. This acceptance occurs in three ways...

1. Yes, and: Agreeing with your Partner

A lot of time is spent on this in improv. And quite rightly so as the core tenet of improv - accepting the offers of the other players (and building on them).


2. Free Yourself: Not Self-Censoring

Allowing free flow to whatever ideas you as the improviser come up with or to whatever your character wants to say. Not judging your own ideas, but jumping in when your instinct takes you. Allowing yourself to make mistakes. If you never make mistakes, you're not pushing yourself hard enough.


3. No Judgement: Not Judging the Other Players

Improv is impossible when not done as a team. The best improv comes from accepting everything the other players give you. Even if it is not what you were expecting or was a mistake caused by a misunderstanding, nervousness, etc. Allow other players to make mistakes; accept that there may be players in your group or class who are not as adept as you at certain things. But trust they are trying to improve. Unless you accept everything they do, mistakes and all, you're never going to have great scenes together. It's when there is an environment of trust that people grow and overcome their own deficiencies and only then can the group grow.
Posted by Peter More at 09:54 No comments:

Today it is Freytag An action, in itself, is not dramatic. Passionate feeling, in itself, is not dramatic. Not the presentation of a passion for itself, but of a passion which leads to action is the business of dramatic art; not the presentation of an event for itself, but for its effect on a human soul is the dramatist's mission.


Drama is not simply the depiction of action, events and passion. It's depicting a passion that leads to action; and depicting events and their fundamental effect on people.


The concept of three acts is at least as old as Aristotle. But one could argue that it's such a fundamental concept to everything – the concept of a beginning, a middle and an end – that it was there since before the beginning of time. (In fact the concept was created before the beginning of time, exists during the existence of time, and will disappear when everything all goes back to being merely inky thoughts in the mind of the Flying Spaghetti Monster.) 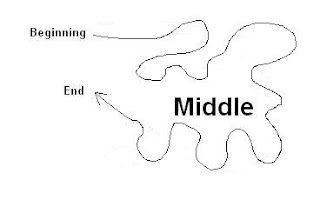 Below is a table showing how prevalent the concept of the three parts is in story-telling theories from all disciplines.