Very few people would have predicted that we would all be doing our shows online so soon into the future. But that’s what has been happening. And as many of us discovered or are discovering, it’s not the same as doing it on stage. Whilst a lot of the core skills are transferrable, there are some things that are very different.

One huge difference is the lack of an audience and the direct feedback of an audience responding and thus shaping what we are doing. The shows lose a lot of that “live factor” which is a big part of the appeal of an improv show for an audience and is the reason that even the best improvised TV shows have none of the excitement of seeing it live. 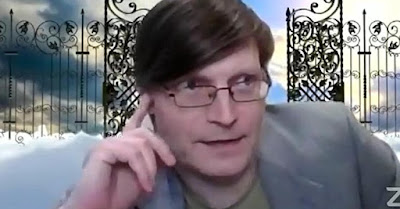 Probably the biggest hindrance for performers is not being in the same place as our fellow players. We can’t truly look them in the eyes and get that deep connection. There is a lag in the conversation so our reactions don’t feel in the moment as much as in several moments ago. We can’t often be as big physically as we once were as we’re either performing within a narrow rectangle or we’re sitting down. This leads to a lot of ‘talking heads’ scenes where two actors just stand (or sit) there and talk with little movement or emotion.

Part of what makes it difficult is that we are trying to apply our skills to a new medium. We all learnt the core skills of paying attention and reacting constructively, and at the same time we learnt how to express them on stage, in a theatre setting. We call ourselves improvisers, but we could more accurately call ourselves “stage improvisers,” the same way you talk about “stage actors” and “screen actors.” The main reason we don’t is that screen improvising didn’t happen all that often, and when it did, it was usually done by stage improvisers and the setting was usually stage-like. Or it was done by screen actors and it was only part of a thing that was mostly scripted.

But now screen improvising is happening all the time and we realise they are different beasts.

As an actor, the transfer from stage to screen is often a difficult one. If you are used to performing on stage, you are used to projecting so the whole room can enjoy you. Bellowing like that into a mic will not win you many friends. You are also used to injecting your emotions into your whole body, often exaggeratedly so. In acting on camera, less is more.

The style of improvisation that many of us learnt (cheeky, exaggerated, stage comedy a la music hall/vaudeville) doesn’t really work. We have to take our inspiration from TV acting. It can still be exaggerated and comic, but within different parameters. Acting for screen is smaller, but still there is energy and intensity, it’s just very often internalised. 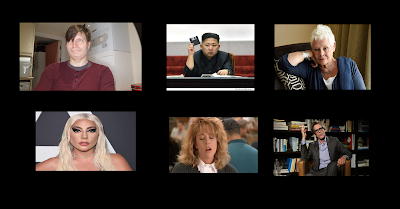 Sets are another limiting factor. In improv, because the action can be set literally anywhere, a group will either perform in front of a neutral curtain with some plain chairs for everything else or have a million pieces of furniture all lying back stage and a set of stage-hands ready to deploy. At home, the default choice would be to find a blank wall or hand a neutral curtain. As any visible furniture kind of gives a location. If you have the time and your device is portable, you can quickly create a location in another part of your house to best represent the next scene, but again, this is can be a distraction or possible delay although can be impressive if pulled off well.

Now there are virtual backgrounds, but not everyone can use them and quite often they are more of a distraction than something that genuinely sets the location. So be careful. Practice using them with your group but see how you (all) feel about the results. Unless everyone has devices that can handle it well (and not all can) and you know how to set them up quickly, they might just get in the way and take you away from being in a few moments ago.

The place where there is a real win is props. On stage, miming objects makes so much sense. In improv, most of the time we don’t use them, because you either have a large enough collection of them that you can find something usable or you have nothing and mime everything. (The middle ground is where you have a limited set of props because you know the setting / genre beforehand.)

Miming, however does really work on screen. Fortunately, we are mostly performing at home now, so we have within a short sprint, practically a full set of everyday household objects. (Maybe the history of improv ask-fors hqas been leading us to this moment. “Can I have a house-hold object and a room in a house?”) If you know there are things you are likely to want in a scene, it just takes a little thought to have them available within arm’s reach.

One other area, we have to adjust is in our director’s heads. As improvisers, we have different heads: we are actors, co-writers and co-directors all at the same time. But there are big differences between directing for stage and for screen. So instead of thinking about where we are on the stage, we can think about how far we are from the camera and where we stand in the frame. We even have extra choices we don’t often have on stage, such as extreme close-up. We can even play with angles in a way the stage doesn’t lend itself to.

All these are things an audience understands and to a degree expect having been watching TV for much of their lives. We also, really, should be thinking about what’s on screen: i.e. the shot the audience is seeing. A dialogue on TV will usually cut between the two speakers, but the convention for an improv show is that the two people keep their video on. The main problem being that as it usually has to be controlled by the actor and switching your own video on and off is clunky, but some conferencing software allows a host to control what is seen and I’ve seen some shows using live-TV software. Both of these mean that actually means the role of a director (or live editor) makes sense. Very much the way it makes sense to have a lighting improviser in many venues.

A director can swap between views and “pin” specific videos to simulate cuts between actors, they can share pictures or video to set up locations, they can share music for emotional or dramatic moments, especially when there is no dialogue.

Actually, music can be a place online shows struggle. With the lag and the fact speaking often cuts out other sounds in Zoom, for example, it’s impossible to improvise songs, except when the music comes from the same place as the singer. Indeed, speaking over music can be problematic on things zoom unless the speaker is the one sharing the music, which makes it yet another thing that most actors never have to think about.

I’ve very much taken the stance that our inspiration on how to produce content should come from TV. This is my opinion.

Perhaps we should look at the other online phenomena such as podcasts and vlogs and make things that are less visual and more like stuff to have in the background whilst cooking. This is presumably why many improv groups have gone the way of live discussions about improv as part or all of their online output.

Or we maybe we should look at youtubers and go for lots of short content with running themes, with the emphasis perhaps on editing.

Or we could take our cues from TikTok and simply lip sync to sound clips from Whose Line Is It Anyway.

When I started writing this it was very early in the whole lockdown thing, other things kept usurping it. It seems less good timing with many places going out of lockdown. But with a potential second wave may be it’s pertinent still. Plus, I don’t think the concept of online shows will completely go away just because virus does.