From the first part, I’m still thinking about an infinite number of Patti Stiles and what kind of amazing universe that would be. Everything you did (and I’m not just talking on stage, but in the rest of life as well) would be supported 100% by at least a million Patti Stiles and there would be nothing you could not achieve. It’s a great thought.

Back to the show. After every set in the first half, you were left with a determination to see the show of that group. For the Swedish group (Gbgimpro from Gothenburg (which is Swedish for Gothem City (possibly))), you had little to do to be able to see their show except not go home early. After 15 minutes to top up your alcohol / nicotine / sugar levels, they took the stage to do their format “Big Issues.” This is a collection of scenes and stories related to a theme in the form of an issue we face everyday as people. They are hugely likeable performers. Right from the beginning you want to be their friends and make sure they are getting enough to eat. They start off with such energy and quick changes, you get sucked in easily. The stories were good, the changes seamless. The initial pace was hard to maintain but their likeability, undoubted talent and sense of fun did not wane. And although it seemed to take a little finding, they did get back to a variation on the first scene for a very satisfying finish. 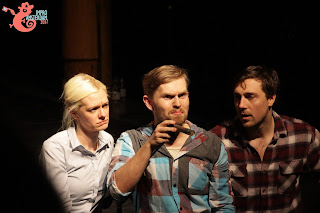 Every night a choice has to be made between one of two late-night shows. This night I saw the Romanian group Improvisneyland with their show “what makes you you?” They had professional promo material and a strong concept including introductory videos. Their concept was about looking beyond the national and regional stereotypes and looking at what makes people who they are.

We were presented three segments of scenes about 3 different aspects of both stereotypes about different places and the deeper questions of what makes us us (or we we? No, maybe not). These three parts allowed them to introduce us to the three regions in modern Romania and to show us a bit about them. So we were going to at least learn something. 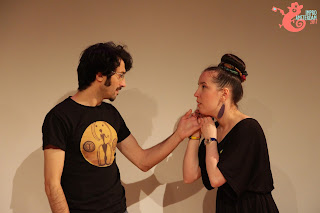 It’s quite a tall order to tackle something like this especially when they can include such tricky subjects as “casual racism” and espespecially doing it in a second language.

There was a running story about a “gypsy servant” that evolved nicely to subvert the stereotypes which was necessary for comfort of the audience, but sometimes tricky in improv because you can get stuck in the portrayal and attitudes that were started.

The group brought an earnestness but still with a sense of fun that helped pull them along. It was a worthy endeavour that we admired them for doing in a language that was not their own. My favourite line of this show was the heart-felt, “I like his eyes: they’re sad.”
Posted by Peter More at 10:33