The main show started with “Promised,” a format about 2 people coming together and falling in love. The audience picks which of the cast they want to fall in love. This time they picked WIll Luera and Roemer Lievaart. A European audience will typically pick 2 men when presented with a choice like this. It happens much less I’m sure in shows in Saudi Arabia or Alabama. 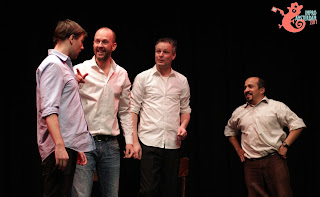 The audience named them Mike and Sanderson, which was pretty restrained of them. The show, which is a kind of an indie rom com, has four acts pertaining to the four seasons. It starts in Summer with them randomly in the same place, but with other people. I say randomly, but because it’s love it’s actually fatalistically or, as it’s a romcom, it’s more plotpointedly.

Before each act, the main characters have some facts told about them. The facts paint the characters a bit, but didn’t seem to get used much.

It was great to see the worlds around the main characters, although there were not so many strong relationships there, which I missed because the main characters don’t meet until the end and so that relationship, which is usually central to a romance story, is not there. A way some stories where the couple don’t meet until the end get round this is by having a strong relationship between them because they are communicating without knowing or showing that their lives are so parallel that you know they are going to be together. 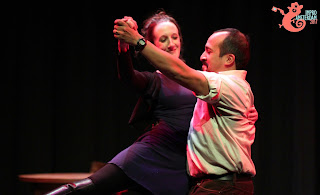 Will Luera and Charlotte Gittins had such great chemistry tonight both when she played the love doomed by the self-discovery Will’s character had to go on and the domineering tango teacher. The latter scene was lifted even higher by an impromptu tango song by the two musicians and a singing Swede. 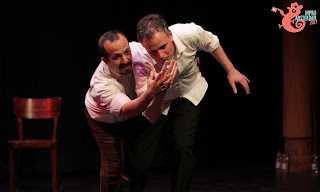 The whole show built nicely so that Spring, the final act, starts as summer did, with the main characters in the same place as before, but now they (and we) are primed for what they call in movie terms a meet cute. This is where the couple meet properly for the first time and you see the spark of what will come. (Or at least until Summer if you’re being cynical.)