Two Colombian clowns and a Canadian DJ are in a theatre. One Clown turns to the other and says absolutely nothing. Now that’s comedy! 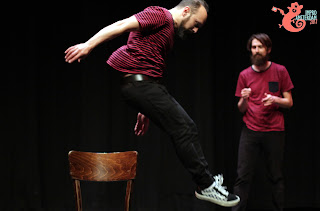 Picnic Impro are Felipe Ortiz, Daniel Orrantia and DJ Mama Cutsworth. Their show, Speechless, uses the amazing physical skills of the two Colombians to create a very different show to other improv shows. They are both great clowns, physical actors, mimes and even have some acrobatic skills. They show that there really is no need for words. Acting, situation and music can provide the emotions and the stories that emerge. And sure, there is a limit to the complexity a story can have when there are no words, but given the choice between a great simple story with compelling characters or a highly complex story in which we get lost and eventually stop caring about the characters, if we did in the first place, most people would go for the first option.

That’s not to say the stories are simple. They are straightforward and there is an honesty of emotions, but a lot of stuff happens. They take their time to portray it and make it as clear as possible. It all helps make it very compelling. 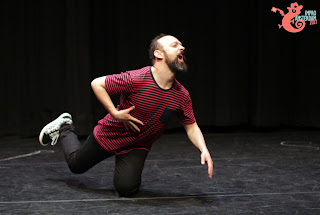 This show had the strongest start to any of them. They had a strong opening using spotlights and their eye for physical comedy they made us laugh and impressed us just by appearing in spotlights.

DJ “MC” provided the soundtrack. She has a director role sometimes, cuing music that will bring certain scenes back and perhaps steering the emotions, and at other times she has the perfect track or sound effects to heighten what is going on. 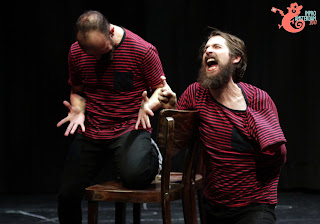 Felipe’s portrayal of a child was so spot on, we needed no information. We could see the rough age and the relationship with the parent. From this start we got to see a cycle of life story, saw the parent get old in front of our eyes and in a finish that moistened eyes all over the theatre, the Death came and led the parent into the light. It was an amazing moment and I must commend Emil Struijker Boudier, technical improviser extraordinaire, who was on fire this show. He was doing all sorts of subtle light things, that most people probably wouldn’t notice, such as slight light changes when doors and windows are opened or closed. But in the end he was ready with a set of lights at the side of the stage to be the literal light to be walked into, so that the whole show ended with perfection of sound, lighting and movement.

It really makes you wonder why do we need talking at all? And certainly don’t need nearly as much talking as goes on in most improv scenes.
Posted by Peter More at 17:24