Backstage at festivals the atmosphere is nearly always of excitement. Sometimes towards the end, it’s exhaustion mixed with excitement, but mostly it’s excitement. Every year at IMPRO Amsterdam, the back-stage snacks get more elaborate than the year before. By 2024 there will be meals served by a butler.* 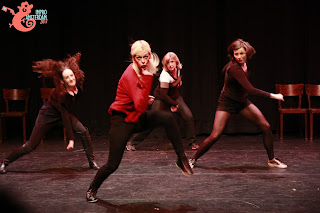 The first show off the night was Cage of Fools which is a hosted show of short games with intermediate chats with the players. It somehow reminded me of the short-lived British TV improv show Fast and Loose.

In between games the host, Rod Ben Zeev, asked them questions about relationships. It was a nice chance to get to know something about the festival cast, or half the cast, although it was the bit that was more hit and miss than the games. By now, the cast is working well together and the show had some great moments. Something different than what normally happens at the festival these days. 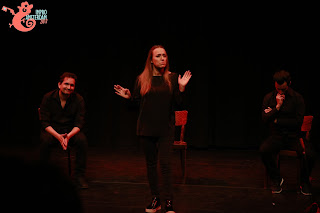 After the break, we were treated to Impro Fado, a format by Portuguese group Os Improváveis. Fado is a style of music and the word fado means “fate.” As well as 3 actors they had 2 musicians and a singer. After every scene, the musicians and singer performed a song about what had happened. The show and songs were mostly in English but with some Portuguese. We didn’t mind that. In fact, although the actors weren’t held back too much by their English, they were physical and emotional enough that we could have followed with a lot more Portuguese. The singer sung much better when singing in her mother tongue. I think partly because the Fado style is very much tied to the Portuguese language. She had a phenomenal voice, and we could have happily listened to her sing the Lisbon telephone guide.

The scenes were highly dramatic and the story was closer to tragedy than comedy, but that suits the style of the music. There was some levity, but I always feel refreshed watching a show that is not trying to be funny. And the end of the main character going back to the abusive relationship she ran away from rather than stay with the kindly man who gave her freedom was fitting the genre and, unfortunately, life. 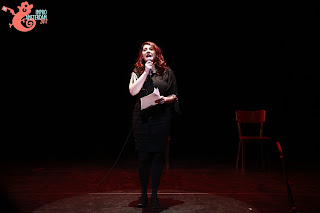 Of the late night show, I saw Ohana performing Sidekicks. Ohana seems to be a sort of improv band camp and the cast or this show were a collection of improvisers from various currently European countries. Their format, Sidekicks, follows two minor characters whilst around them or behind the scenes a bigger story is played out which the just bumble through. It’s very much based on the play Rosencrantz and Guildenstern Are Dead, which follows two minor characters whilst the story of Hamlet goes on around them in the background. The 2 central characters are a basically a comedy double-act comprised of two dumbards who talk about comedic inconsequentials whilst they almost get involved with (but never quite do) the action. 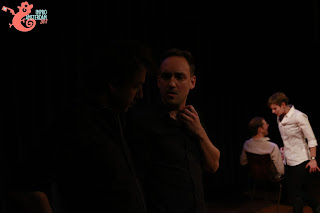 It’s an ambitious plan. The show was a lot of fun and they achieved what they set out to in a broad sense. There were some funny moments and the central duo had some nice games. This is a group that has un together but does not perform a lot together. I love the concept, I do feel it would have been much stronger if the backdrop had not been comic but epic or tragic. But instead it was very often played for laughs which took away from the power of the comedy of the central duo.

I’m looking forward to more high-concept format applications next year. Personally I want to see a show based on the movie Momento that plays scenes in reverse order.
Posted by Peter More at 22:45