As a reaction to the heated activity around the Compagnietheater Amsterdam always gets very cold in the week of the festival. It often snows. It hasn’t so far, but the canals are freezing and extremities get a bit numb if you let them. The Swedes on the other hand, are enjoying the very mild temperatures.

The first main-stage show was Mortal Coil a format devised and directed by directed by Patti Stiles. It’s an interwoven-stories type of format and Patti gives subtle direction in that she doesn’t use a lot of words but she gets a lot of information in there. She sets up a clear start and then usually leaves the actors to find their path. She brings the strands together with ease. 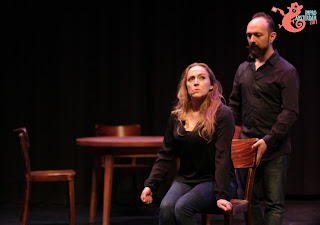 The stand-out story was the relationship between a queen and her servant (played by Marta Borges from Portugal and Felipe Ortiz from Columbia). It was a bitter-sweet tale of two people who love each other but could never admit it because of their differing roles. They played perfectly the pathos underscored with some great physical comedic games. It’s exactly the sort of thing Chaplin was aiming for. 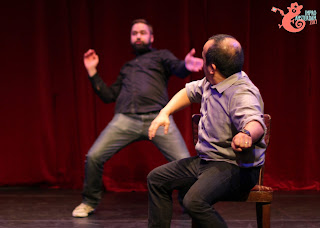 The main show of the evening was Big Bang Improv from Boston in the US. The name is well chosen. They start strong and keep expanding. They start by getting something that “brings you joy” which is a simple and powerful way to begin and already puts the audience in a good mood.

Movement is a big part of the show and they managed to use much of the theatre and also the audience. They swap easily between scenes using a variety of techniques, but it is always clear that a new scene has been started. Even when there is little movement to show a new scene, there are clear physical, vocal and emotional cues. They are great at following paths, heightening, using whatever happens and creating great “what if?” situations.

A great show which found a great end incorporating much of what had happened before. 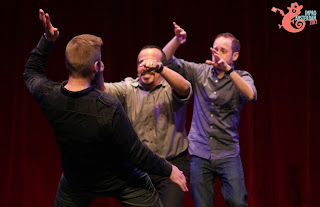 The Greek group Bus Kai (which is probably not pronounced how you think) performed their show Myth to Myth as one of the late-night shows, They are a duo who take their inspiration from the mythological stories they read as children, bringing their childhood books for the audience to pick a phrase out of to inspire them. 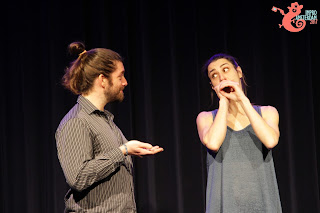 They then took the structure of these myths and brought our two heroes on a journey of both literal traveling and self-discovery. They had a good use of the structure and archetypes of these myths. They struggled a little to find the end but we were still very much with them when they did. A fun turning of myths into a cute modern story.

Finally, I’m reposting this famous photo from the battle of Impro Jima... 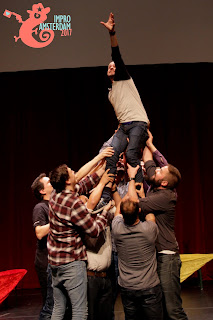