Saturday, the final day of the festival. It’s been a long road, but here is the blast at the end. The final day doesn’t include a group doing their speciality thing, which is what excites me most about this (and other) festivals. It does, however, have two shows where a cast of great people who have been performing, rehearsing and eating/drinking together for a week put on 2 high-impact shows. Plus there’s a party. Partying at the end of a festival likes this seems mandatory. Whether you are a performer who's had a hectic but rewarding week in a foreign land, and organiser who has blooded, sweated and teared to make it all happen to what appears seamless to any one outside of the organising circle, a fan who’s seen a few good shows in a week, or a battle-weary reporter, hoping to get the improv equivalent of a pulitzer. (It’s just as prestigious, but it’s imaginary, which is just as well as so is my mantelpiece* is imaginary. (* - I realise this is an uncommon word, so here is is translated for the visiting groups: schoorsteenmantel, manto de chimenea, Cornija de lareira, spiselkransen, mantel, and, um, imagine putting a shelf above the barbeque.) 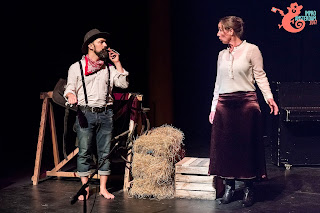 The first half of the show was a Western directed by Patti Stiles. It had a lot of dramatic tension, a set and costumes which I am always excited about in improv because 95% of improv shows, you have zero props and no specialist clothing except a checked (plaid) shirt, which or some reason is compulsory improv-wear in many parts of the world. It’s a genre that to do well requires more acting than improvisers usually get to use, but they managed to build some great moments / scenes, both comic and dramatic. And the costumes and music helped a ton. Again Felipe’s character, a wronged man who get’s his revenge, stood out and he gave Laura’s character the rare improv gift of a protracted non-comic death. It was a very Western moment. 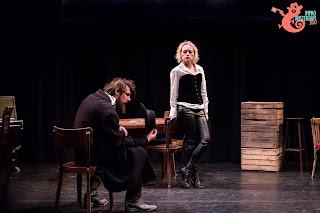 At the complete other end of the emotional spectrum, the second half was a High School Musical. Teenagers come to terms with life, love and becoming adults; and sing about it whenever possible. It was a lot of fun (one could say gleeful), and the Swedes, who brought the format and perform this a lot, really shone. Plot- and end-wise there was a bit of confusion, mostly due to having a bit too large of a cast, but the big production numbers benefitted from having those numbers, providing large dancing ensembles (as these things often do). And, of course, it would not have not been anything without the 3 highly talented musicians who composed and played the music on the spot. If you are going to close a festival (and they all have to at some point), you can’t do it with more energy than a musical - old Chinese proverb. 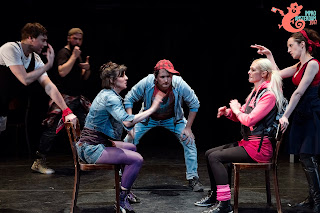 So that was the festival. If you went, I hope you recognised it and brought back fond memories, and if you didn’t, I hope it gave you the impulse to go next year. As ever the quality of the performers invited is top notch and I hope to see more of them all elsewhere. 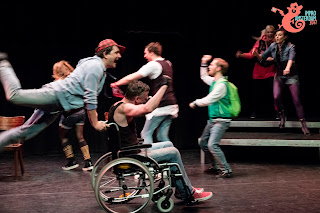