The festival kicked off last night with an introduction to all the groups taking part in a format called Pot Pourri. Pot Pourri, if you didn’t know, is the dried fruits and flowers used to make wooden bowls smell nice.

Firstly, individual challenges were set for each team with the intention to show off some of their individual strengths. At this stage of the festival, the full cast hasn’t really gelled. And the Dutch team, which was put together for the festival only, has barely had a head start. But it’s only the first day.

The Austrians (Rocket Sugar Factory), who are really North Americans, set the bar super high with a terrific creation of an epic story in a 5 mins. They are extraordinary good at picking up on each other’s suggestions, and really letting the story career ahead, jumping from one big scene to next, all logical and in the genre and all played with great commitment and a clarity in the characters that allowed the other actor to take them over seamlessly.

They were followed by the Americans (The Raving Jaynes), who are actually Americans. Their scenes are so rooted in movement, incorporating much from the world of dance, that when forced to do scenes in Dutch, of which they know only a handful of expressions, they still created a highly visual story driven by clear emotions.

Then a couple of group games to mix up the teams. At some points, these showed how improvisers from different backgrounds who don’t know each other so well can create something great using the simple process of listening and agreement, specifically in the scene about the lift that descends to Hell. And at other points they showed that without the knowing and trusting each other, the listening and agreeing can get lost.

After the break, we had the show of the Mexicans (ImproTOP), who are, well, Mexicans. And not afraid to show it. Their format was called Mariachi Stylo which is infused with Mexican music and folk storytelling. They are good at special effects, finding and playing games, as well adding detail, especially in their already wonderful physical work. My favourite game was probably the sending away and recalling of the horse. 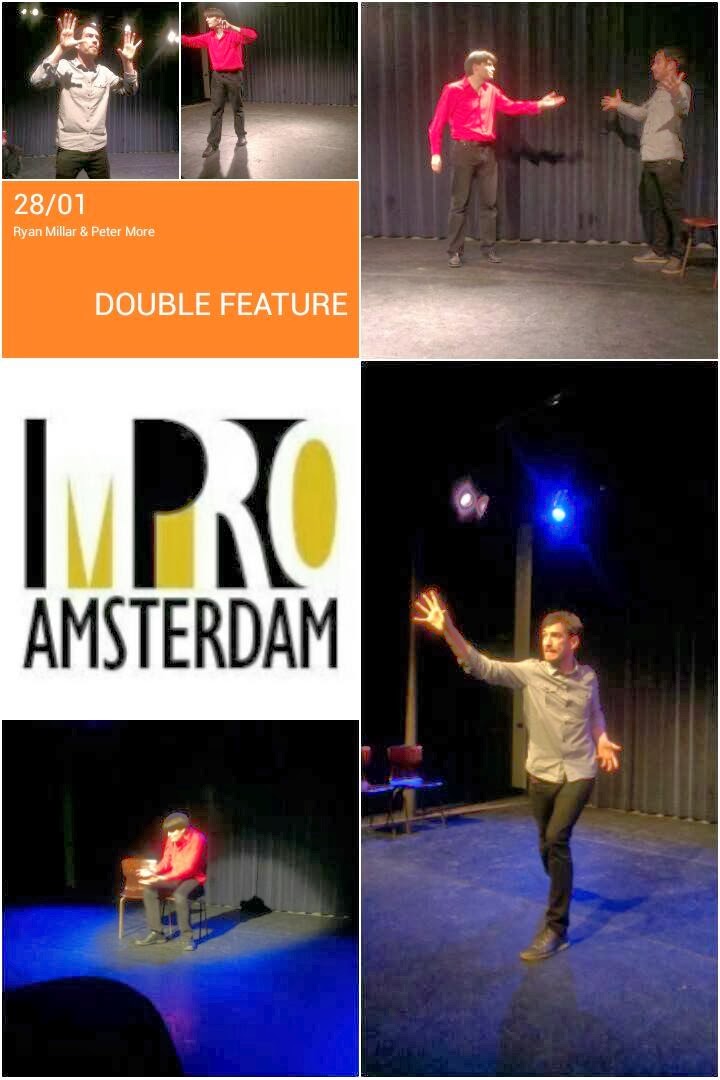 The late night show was Double Feature, which featured myself and the charming Ryan Millar doing curtailed versions of our movie-based one man shows. I was given 60s Psychedelia by the enthusiastic audience which was a lot of fun. It meant I got to do 2 drug trip sequences, which I don’t get to do nearly enough of. Ryan got to tell the story of Earth Sally trying to get back to Earth and included one of my favourite visuals of the night: the classic hands pressing from different sides of a pane of glass, except one of them was all skeletal and oozing rotten flesh. See us both again soon at the Remi festival.

Thing I learnt during the show last night: If you turn up naked to a clothes shop, you’d think they’d be happy because they know you’re going to buy something.