In my quest to find out about storytelling from all angles, I have been reading a couple of books about creating comics (as in graphic novels / cartoon strips not as in building a comedian from scratch). I'm not really much of a comic reader, but there are similarities between Comics and improv as I have mentioned in an earlier piece.

One thing that was very interesting in Making Comics (Scott McCloud, 2006) is the discussion of clarity vs intensity. Clarity is telling a story, keeping it understandable, letting the characters shine through. Intensity (in this context) is about making the actions exciting and urgent, the characters and events extreme. It is the "Pow! Zzappp! Zing!" that we think of when we think of superhero comics. In a way clarity is truth; and intensity is heightening (and exaggeration). 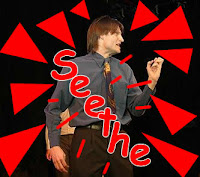 Short form is often all about intensity. All emotions are ramped up to 11 and characters are big and frequently superficial. Long form tends towards clarity. At least successful ones do. But actually, things are not so polar. A balance of the two is what is wanted, often tending towards one or the other. After all, you do want a little clarity in your big, shouty, animal-based characters scene. And we like to see great stories where there is heightened emotions and dramatic, exciting moments.

If the emotions are always extreme, this can actually make the story less interesting. Or it sets it in a specific genre where this is the case – soap opera, opera, melodrama, etc.

Usually a story will start off with people's emotions at their "normal" level, at a volume typical for their character, their actions perhaps even mundane. But there will be moments in that story when these things become heightened. And because you've started in a "normal" range, the audience can experience that heightening and care about it (as long as it comes from the events of the story).

Obviously characters can be "intense" as in brooding or unquestioningly loyal or bitter, etc, but this is not the form of intensity I'm referring to here. Although there is one form of character intensity that is problematic in storytelling.

We have all met people who live their emotional lives at full intensity (everything is either phenomenally awesome beyond compare or Earth-shatteringly awful without any hope of recovery). But how often are films about people like that? Not often, I think. Because they don't make for good stories. There's nowhere for them to go. The slightest thing (it seems to us) sends them to the pits of despair and then something equally trivial makes them inordinately happy. (This is a short form story arc.) We want our heroes driven into the pits of despair by a relentless barrage and it to be real despair where they question everything about their life. So that when they drag themselves back to the heights of salvation against all those odds, we applaud this achievement and are palpably relieved.

It is the moments of despair and the heights of victory that intensity is most useful (and at other key plot points too), but generally for the rest of the time, the story is told and the characters are expressed and the scenes played out with a clarity that keeps the audience involved and caring about what is going on.