I recently finished reading Understanding Comics by Scott McCloud. I'm not really a big follower of graphic novels, but this book was recommended as being really about storytelling.

It certainly covers a good deal about storytelling, but mostly in the context of depicting said story in sequential boxes and it also has other line-drawn axes to grind . Having read it, like all good obsessives, I asked myself, how can I apply this to the thing I'm obsessed with? There is a good deal that can be applied here to improv.

What was good, was that the book was also written by an obsessive and it's great to see obsessives from other media especially those who have made a success of it. It's great is to witness someone enthusing about an art form that's very comparable to improv in that it's an art form often perceived as a hybrid, i.e. made up of other art forms. An art form that is often sidelined and looked down upon, yet is actually more adept at communicating directly to people than others that are generally more highly regarded.

Over the next few weeks, I'm going to go over the concepts that I think can be readily applied to improv that this book brought to my attention or reminded me of. Starting today with...

Closure is the human mind's ability to fill in gaps in what it sees [1]. McCloud puts it as "observing the parts but perceiving the whole" [p63]. Or put another way, "if something is missing in an otherwise complete figure, humans will tend to add the missing parts." [2] Examples are usually given in terms of shapes. For example, circles drawn with dashes that even though it could be seen as series of curved lines, we clearly see it as a whole circle. But it's the same when we see just the front of a car or the end of a box of cornflakes, we assume with such conviction that the rest of the object is there, lurking around the corner or behind the other packets. 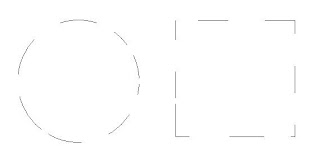 It also works in the written and spoken word. Ellipsis, where parts of a sentence are omitted (and sometimes replaced with three dots called an ellipsis), is often an example of this. E.g. in "He gave Sheila the coat; and Gavin the knife," "he gave" is omitted before "Gavin" as the meaning is clear without it. It even works for parts of words as in the flowing examples: "Look out for the skellton!" "I hope I've may my point."


In terms of storytelling, closure in this sense means things that are omitted that are filled in by the audience. For example: a guy goes sleepily into a room and then emerges rubbing and opening his eyes. Here we automatically assume he's been to sleep. We didn't see it, but we know the normal sequence of events and this fits the pattern.

For another example, Jack shouts angrily at Allan; In the next scene Allan is lying on the floor and Jack has a clenched fist. We know Jack just thumped Allen without even having to see it.

Horror films use it a lot. Especially older or low budget ones or those going more for suspense than gore. We see the shadow of the creature approach the terrified girl, and then we cut to a tree. There is an ear-piercing scream and the birds fly off. We know it was the girl who screamed and that the creature has got to her. In fact even seeing the shadow of the creature involves closure, because we don't see the actual creature but we know shadows don't move about without the thing they are the shadow of. (Mysteries and thrillers actually take advantage of closure all the time. Often to throw us off the scent or make us think the story is going down one path. It's something we might deal with later.)

So closure in stories involves the audience filling in things or events that they don't see either during or in between scenes. It's very useful. It means we can skip whole chunks of things that the audience knows are going to happen or that are obvious from what is already happening.

It has great benefits for improv. It means we can don't have to show every single little thing to the audience. There is scope and precedent for omitting scenes or chunks of scenes. Especially, for example, later in a long form when we're racing towards the end or when a character has to do a lot of preparations. Take the situation where the hero suddenly needs to go and get a hat to get into the Hatters' Ball, we could simply have him declare he needs to get a hat and see him in the next scene proudly putting on his new hat. We don't need a scene of him entering the hat shop, choosing and buying that hat, delaying what we really want to get to. A less dramatic and more common improv example of closure is starting a scene in the middle.

I could fill a whole book with examples of this from movies, but all we need to know is that where the audience can easily fill in the gaps, we do have the scope to miss obvious parts of the story out and jump to the more interesting bits. It takes some practice to be sure, you're missing out bits the audience will assume happened and not need to see. Otherwise what the audience thinks is going on and what you think is going on might be radically different. And that's not good.


Scott McCloud has since written a new book much more about the storytelling and I hope to have a look at that soon.