This is the second part of my exploration of the useful things for improv raised by Understanding Comics by Scott McCloud.

Comics, as much as films and books, love to jump in space and time. These jumps often use an extension of the previous topic, closure, for us to be fill in the gap or make the connection. Moving to another time or place in a story is a great tool. It allows us to follow multiple threads, skip bits of the story we don't actually need to see, see the causes or consequences of an event or behaviour, or see parallels between events separated by time and/or space. There's so much more it can do. Here's an example of a time jump used to reveal a truth about a character. 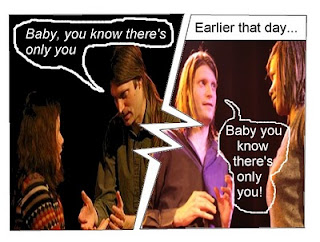 Many types of transition are common to most media. The square area at the top or bottom of a comic panel is the equivalent of the narrator or voiceover in improv and movies. Or a jump can be obvious given the context: often based on the last thing said, such as: "Okay, I'll meet you at noon and the OK Corral."

Comics and movies are especially blessed with being able to use imagery to indicate movement in time and space that doesn't mean we can't learn from them. We can simulate or allude to some of these jumps (or edits).

We've all faked the wobbling screens of a flashback, but how many of us have morphed from one scene to another or been in a split screen with our old and new selves showing how different or similar their lives were? Have we ever described effects as the narrator, the way a book would have to? "As he pushed the button, the whole room went blurry, our faces lost their distinctness and objects hung in the air awkwardly. We were in hyperspace."

The medium of comics is by its nature a medium of jumps. With occasional departures, all comic stories are made up of multiple panels that are essentially pieces of frozen time. So comics, being distinctly discrete, in their depiction of events get to play with time in a way we as improvisers (being physical beings and unable to be anything other than continuous) cannot. But that is not to say we can't also play with time. McCloud talks a lot about how much of what goes on in comics goes on in between the panels – i.e. in the mind of the reader as he or she connects each panel. We as improvisers only really have those gaps during edits, but that doesn't mean we can't think about the time between actions and dialogue; or think more about the connections the audience has to make during and between scenes.


So let's look at them more from an improviser's point of view.

This list might not be directly applicable to improving your improv, but the more aware we are of time and space and how much control we have over it on stage the better. It can only help to make us stronger performers; more in control of every aspect of what happens on that few square feet of wood where we do our magic.
Posted by Peter More at 19:59