This week I've been pondering on whether talking about a 3rd person (who isn't in the scene) is an inherently bad thing. My conclusion is that it isn't. As long as the scene doesn't become about that person.

As I've said before, a scene should always be about the relationship between the characters IN the scene. We discourage rookie improvisers from talking about people outside the scene, because it usually means the scene just ends up being a discussion about someone who isn't there.

But once improvisers are of an intermediate level, they should be able to have a scene where it's not about the person (or thing) they are actually talking about. A scene inspired about the word ball, will probably feature a ball quite heavily, but the scene should not be about the ball. (Unless the ball is a one of the characters in the scene.) 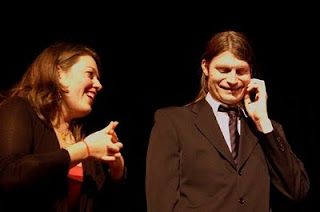 I'm not saying you should frequently talk about people who are outside the scene, I'm just saying it's not necessarily bad. I don't think it's a hard and fast rule that you shouldn't do it and that if handled properly, there is no solid reason why not to.

It's also a way of illustrating character directly. One thing I have realised about people is that when one person is talking about another person, they often reveal more about themselves than they do about the person they are talking about.

Certainly in real life what people say about other people are generally not proven facts, but an impression, opinion or judgement of that person.

For example if A says B is irritating, what that really means is that A is irritated by B. It doesn't necessarily mean that B IS irritating. B might be a rival, an ex lover or very pleasant which grates at A's grumpiness.

Obviously in an improv context where simplicity is usually the best policy, it probably does mean X is irritating, but it doesn't have to be.

Not only this, but how A talks about B shows a lot of information about A's character: Is he diplomatic, gossipy, superior, sympathetic, admiring, judgemental?

I agree most of this could come out in reference to the scene partner (except, perhaps gossipy), but my point is that if treated in a similar way to objects, characters outside the scene can be mentioned, even discussed at length as long as the real subject of the scene is the bond between the characters who actually bothered to be in the scene.
Posted by Peter More at 17:55