In acting, certainly, the ideal is to lose oneself in the role. Become that character. However, that ideal is at odds with what the public seems to want. Many of the most popular actors tend to be people who keep the same character no matter what the role. Arnold Schwarzenegger, Sean Connery, Bruce Willis, Julia Roberts, etc. Most of the early Hollywood stars can be included as well. That's not to say they can't (or couldn't) act, but their success was in part due to a constancy in the characters they played.

Actors who lose themselves in a role tend to take a lot longer to get recognised by the public, basically because they are harder to recognise. 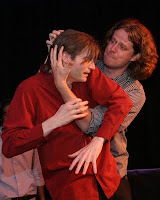 There is actually a very similar phenomenon in improv. The person who the audience goes home remembering is not necessarily the best improviser. He or she was the one who shone, who was the funniest, the one the audience warmed to the most or got the best line in. But he or she was supported, set up and allowed to shine by other players who yes-anded no less (and often more) than he or she did. In fact, sometimes, because audiences can often enjoy jokes that are at the expense of the scene, or having the ridiculousness of a situation directly pointed out to them rather than it being used to create a new world, and they do find utterly hilarious the destructive mischief of a deliberate block, it can be that the player the audience remembers and loves the most was, ironically, the most destructive player in that show.

When the direct audience feedback of laughter is all that is sought by a player or a group, it is very easy to fall into bad habits. Joyful, well-rewarded bad habits, but habits that can make telling longer stories or playing scenes with any realism or honesty difficult.

It seems like the path to getting singled out for praise less, but, if your fellow players all think the same, you will find yourself in a group that can play or do anything: tell fantastic stories, make awesome scenes and allow rich, nuanced characters to emerge that will stay with an audience long after the cheap fizz of a knowing block.
Posted by Peter More at 22:49