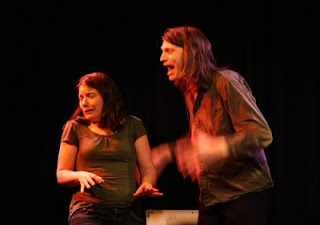 For me, it's (2), actually. In a way (1) is paying lip-service to acceptance rather than a full acceptance. The offer does not appear to have been accepted emotionally, mrely responded to intellectually. (Of course, this could be a character choice where a character does not display emotions but voices them, but then we would expect to really see that explored.) Even though, on the surface, (2) is a denial, the anger in the voice shows that it has been fully accepted by the actor and demonstrated through the character. Also in terms of realism, (2) is definitely your man.

Obviously the hands-down winner would be (shouting) "Yes I am!" but the above two illustrate that, as in life, the message you get across is very often not in the words.
Posted by Peter More at 19:44