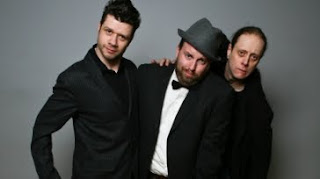 Recently Canadian improv duo Crumbs were in town as part of their annual European tour. Their show is a two-man, two-story longform which morphs between the stories in often ingenious ways.

The first half of the show was them playing together with some local improvisers. It's a great experience for these players but is more a perk for the organisers than what the audience really is there to see. However, if I was an organiser, I'd almost certainly be doing exactly the same. And although it feels a little like a diluted version of what's to come, this is very much the support band concept: warming the audience up with a less accomplished but similar group.

Crumbs themselves play clear, slightly exaggerated characters. They take their time to build the tension, play the emotional truth of situations and be affected by what is going on. They keep things simple in terms of exploring what they have rather than inventing more and more, but are ready to move the story on to the next beat, location and strand when it needs it. They also seem naturally or deliberately (or both) to use genres to underpin their stories. In the show I saw, a story about a dentist was done in a noirish cop thriller style and the story of a man whose day spiralled out of control just because he needed to make a phone call was a kind of black comedy that ended with some nice poignancy. I suspect a lot of their stories end with poignancy, as they do seem to play characters with depth and inner needs and don't feel the need to have 100% happy, everything's fixed, "Hollywood" endings.

Because they keep it simple, and take their time to explore all the ideas that come up, they effortlessly tie up stories at the end and allow us to really see inside their characters. That's not to say the stories are simplistic or obvious; it's that because they take their time we always know where they are in terms of the story and even when there is a big jump in time, location, etc, it is clear or made clear why we went there.

Ironically, counter to conventional improv wisdom, the show ended on a piece of new information. The name Josh had never been mentioned (I'm almost certain); the dentist had always been "doc" or "doctor." But it was the perfect out for the show. And it wasn't really new information. We knew the Doctor must have a name (common knowledge) and that the assistant wanted to have non-professional relationship with him, so all that was new was the specific detail of what that name actually was. And what capped it all was that it was just a regular name (for North Americans, at least). No stupid joke name to try for that extra laugh that would actually have undermined the emotion and feeling of resolution of the moment. This, as much as anything else they did that night, showed real class.