Physics and Metaphysics of Guns

All the earlier talk of guns made me think about how badly guns are mimed and used in general in improv.

Secondly, guns are heavy. Pistols are solid metal designed to withstand mini explosions within them. They are much heavier than cowboys and action heroes make them look. Most do not fit in your back pocket. And when you shoot them, they give a good old kick. Oh, and unless you have a silencer, they are loud.

Bullets travel somewhere around or faster than the speed of sound. So, by the time you hear the "Bang!" that bullet's been and gone, passed through your major organs and probably already embedded in the wall. So in reality, you would have to start jumping out of the way before the gun is fired, unless you have superpowers. Now, in improv (as in film) we can sometimes forgive the screwing with physics and see you jump after the bang. This is forgivable because films are often cut that way. But it's still better to start jumping before (perhaps in slow motion) and have this be the offer to tell the shooter to fire and miss. Otherwise, a shot fired by a competent shooter at close range will almost certainly hit home. 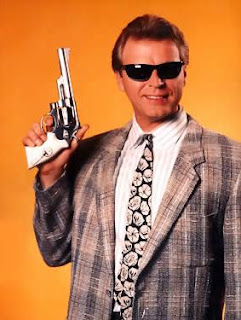 Pulling a gun is a big moment in most stories. Suddenly the life-and-death struggle is real. One twitch of a finger and someone is dead. Introduce a gun into most situations and the emotion of the room will change to fear or panic. If the story is a domestic drama then this is a big, big moment.

Even for the person pulling the gun, it is often a big moment. First-time armed robbers will often be as scared as their victims: the heavy guns shake in their sweaty hands. In your family drama, when the son pulls a gun on his father, boy, does this put both of them outside their comfort zone.

Obviously if you live and breathe guns, holding and firing them can become second nature. only then does it become no different to any other object you might carry with you. You may even get nonchalant when it comes to killing people. Soldiers can get like this; and gangsters, especially in movies. (See Pulp Fiction and Goodfellers.) But even these characters, when faced with a gun pointed between to their eyes, are usually not so cocky.

It's the reaction on stage, for the most part, that tells the audience how to react to a situation. If everyone on stage is blasé about guns being waved about, why should the audience care? If the threat of death won't move our characters, what on Earth will?
Posted by Peter More at 19:50