Frequently in rehearsals, I enforce the no-gag and no-comment rules in an attempt to get people to play more realistically. As I see it, comedy can basically be played two different ways:

2. Knockabout – It's all very jokey. Jokes come from the characters or, often, the actors.

A lot of improv shows end up playing the second way, but the first way is more entertaining, deeper, richer and ultimately more satisfying for everybody.

The second way doesn't have to be taught. In fact it usually has to be untaught. So I like to rehearse playing straight because everyone can do the knockabout, but acting realistically is a skill.

Playing knockabout becomes a particular problem when playing genres. For example, you can't do drama as knockabout, it doesn't look any different to the rest of the show and it certainly doesn't feel like drama. 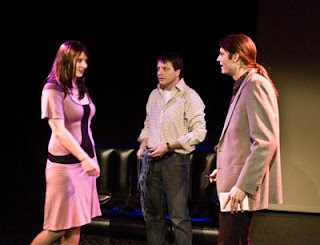 I'm a real believer in trying to play a genre as real as possible. Don't aim for parody, aim for genre itself. As comedians, you'll find the funny and it will probably become a parody anyway. Remember that the best parodies are pretty close to the genre, sometimes indistinguishable to those who don't know the genre. Try to recreate a Western; don't mug to the audience and simply state that this location ain't big enough for the both of you. The most awe will come from a Western scene that feels like a Western scene rather than a bunch of people goofing on Western clichés. Unfortunately, in improv the biggest laughs often come from dicking around, however such scenes will rarely inspire anything more than big laughs.

And even if simply dicking around for laughs is the goal for your show, the more you rehearse real characters, realistic relationships and playing genres straight, the more ammunition you'll have. And if you do aspire to more than this, if you do want shows that contain awe, definitely try rehearsing without emphasising the funny.
Posted by Peter More at 08:52