"Are we seeing something significant to the people in that scene? Or is it just some people doing a bunch of stuff?"

If we're watching a movie, say a bio-pic, we will see 40-50 scenes (according to screen¬writing guru, Robert McKee and others) about, in this case, the life of someone. Now for this person to be worthy of their own bio-pic, they must have been to scores of places, come in contact with hundreds of people, and done thousands of different activities. Yet we only see 40-50 scenes.

Every single one of those scenes has been put in that movie for a reason. Each scene will show us one (or more) of the following: a very typical situation in the hero's life at that point in time; a key event in that persons life; a moment where they changed; an incident that formed their character or lead to change; a scene that highlights their relationships and status in the world; a scene that shows a different side to them. In other words, each scene has a purpose.

There is a reason we are shown each of these scenes.

One thing that might help improvisers who find themselves in scenes that aren't compelling or going anywhere is to ask themselves, "why is the audience being shown this scene?" 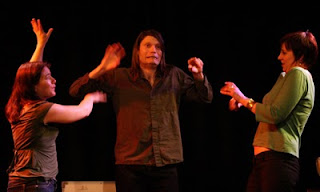 Are we seeing something significant to the people in that scene? Or is it just some people doing a bunch of stuff? At the end of the scene, the audience should be able to say, "ah yes, we were shown that scene because..."

Even when we see a scene of an ultra-typical day of a character, we learn some fundamental details about the characters' psychological make-up. And, nearly always, even these scenes will involve some change. In fact, by many definitions, a scene is not a scene unless someone or something is changed by it. Someone or something must be affected.

The change doesn't have to be huge; it can be quite small. For example if one character insists on the cups in the kitchen being stored on the right, and at the end of the scene, he agrees they can be put on the left, that's change enough (and is actually indicative of an internal change or compromise in that character).

That way, the audience has a reason to be shown that scene and it's far more likely to be compelling and enjoyable.
Posted by Peter More at 09:46