Agreement and the Comedy Store

When I first was learning improv in London, I went to the Comedy Store a few times. I would often be shocked at the amount of gagging and blocking that went on there. There was some great establishing and some awesome songs, but scenes would often be ended with gags that pretty much destroyed everything that came up until then. The audience loved it. Much of comedy is, after all, establishing a routine and then breaking it, so a block where you tear down everything that has been established is hugely funny. (Especially as in the back of the audience's mind is the fact that nothing you are creating is real because there are no props or scenery, it's all thin air.) So why are we taught not to block, when it can be the funniest thing that evening?

We're taught not to block, because without learning not to block, we never establish anything. And the funniest gags come after something of substance has been set up. Not to mention that after a few scenes of setting stuff up and then tearing it down, the audience gets the pattern and it doesn't have the same impact. They'll get bored of the gags. On top of this, whilst a well aimed gag-ending can be very funny, it will never be satisfying the way a nice tie-up with a funny line from one of the characters is.

Of course, once you get into telling a longer story, however, a gag will throw the audience out of your world and you may never get them back in. If you don't care about the story, they won't care. And to end a long-form story that you've spent an hour building up with scene-destroying gag will almost certainly make the audience feel cheated. They may well find it funny; and if your style is somewhat gaggy and comment-heavy, they may well accept it; but they'll never be satisfied. 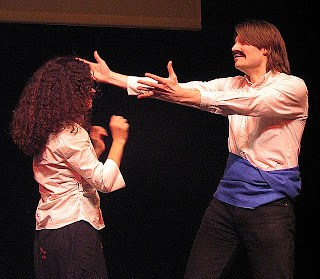 If you follow the "improv as sex" simile, it's like pushing your partner's head under the covers and farting instead of achieving orgasm together.

Back at the Comedy Store, the sheer number of gags and blocks made my newbie improv zeal ruffle. If a zeal can ruffle. Why were they doing it like that? And why were they happy? Why were the two people who set up the scene joyously happy when Paul Merton took their scene and tore it apart with a single one-liner.

Well, partly because the one-liner was usually very clever and very funny, and also because there was an agreement between the players that this was their style. This was part what they did. They were a bunch of (mostly) guys having fun together. They weren't there to create high art and long cohesive stories, they were there to have fun and entertain an often-drunk crowd. It worked for them because there was an agreement (probably unspoken) that this was how things went down.

It draws the question: If a block is accepted by all the other players as an valid method of transaction in their scenes, is it no longer a "block" in improv terms? It also illustrated that agreement in improv goes far deeper than what people actually say.

And the young me, with my priggish improv-purist ways, I could choose whether or not I wanted to go see these guys do this popular show in their busy Central London venue. Or I could always go and sit with three other people and watch four actors above a ropey old pub in a dodgy part of town create a full-length improvised Greek tragedy based on a vegetable and three emotions. I could, and very often I did.

Obviously, I'm not heralding the block and the gag as great improv tools, but I was fascinated as to how they could be happily used in some shows without everybody feeling their ideas have been trampled all over. But before you cleverly shatter your next scene with a well-placed, but all-destructive scene-busting missile, remember your group almost certainly won't be so forgiving.

So, until next time, take care of yourselves, and each other.
Posted by Peter More at 07:55