Magic Moments: What is a Moment? 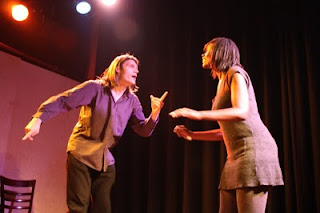 A moment is a point in time up to which everything set up prior to that moment has lead. It's not a reaction to a single thing but reaction to a culmination of events that in improv terms starts at the beginning of the scene or even the start of the show.

If moments are just about the last thing said the result would be a series of actions and reactions that have no consistency. The scene would effectively be a series of free associations with nothing to tie them together. To an audience it would have a very random feel.

A moment is a point in time up to which everything set up prior to that moment has lead.

Like improv, life is also a sequence of moments. Moments in life are similar, although much more complicated. Having just read the above definition, you are thinking "wow, I hadn't thought of it like that," or "I knew that," or "that makes no sense, whatsoever," or "that reminds me, I must call Julie" or some other response. What you're thinking is defined not just by the line you read, but by the whole of the text before it. And more than that, also by everything you have ever read, been told or otherwise learnt or thought about the subject of improv; anything else you have read written by me or any interaction you've had with me; your own experiences performing and practicing improv; anything learnt, discussed or thought about on the topic of causality and similar philosophical topics. All of this feeds into that moment. And that's not including everything else that has happened to you that was playing on your mind (consciously and subconsciously) at that point – relationship worries, work issues, deep-seated fears, recent good news. Actually, it's far easier to describe the input as "everything that has gone before" than to actually detail what is "selected" to affect that moment. Especially as it is probably impossible to know all of the subconscious drivers we have going on in our heads.

This makes a moment sound like a bulky, complicated thing, but, as we know in life, most moments pass without much thought and we respond in a way that is natural not only to our character in its current mood, but to our previous interactions with that person or situation; and with the knowledge and experience we have accumulated over the years. Most of this is subconscious and our response natural. In improv, the moments should also be natural. We've paid attention and absorbed what has happened so far, who we are, what our relationships are, and we just respond in keeping with this without thinking.

Even those moments in life when we act highly out of character or are paralysed into inactivity by a situation would be explainable if you knew what is going on in our heads at the time. People act out of character because they are, for example, inordinately worried, feeling guilty, depressed or ridiculously happy. Even these moments are based on things before the last thing done or said.

In improv, we only have what's been set up about your character since it first appeared or was mentioned, and we ourselves are creating our characters subconscious desires and failings, so our responses will always be explainable by the actors (if prompted or made to analyse), no matter how instinctively we are playing. So as long as we are paying attention, allowing ourselves to absorb what is going on, we can be in that unique moment so created and react to all of it, not simply the last thing said.
Posted by Peter More at 22:49