Lance and Carl are in a scene in a longform that has a noirish thriller feel. Suddenly Carl pulls a gun, says Lance knows too much and shouts "Bang!" Lance jumps aside comically and retorts "you missed!"

Now an audience will probably laugh at this, but mainly because it's a block: destroying the reality of the scene, throwing the genre, character and truth of the moment out of the window, and trivialising (to the point of mocking) the offer of being shot at.

The thing that does most to destroy everything is not the jumping aside but the glib "you missed!" Jumping aside would have been acceptable had Lance immediately followed it up with a dive behind the furniture and/or going for his own gun. This would have been consistent with the genre and current action. However, from this close range, the most consistent with the genre and reality (assuming Carl has shot a gun before which is likely given the ease with which he pulled it out) is for the bullet to hit home. 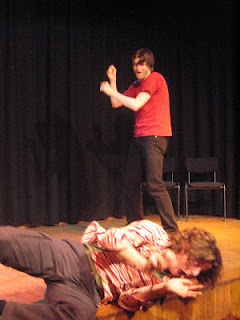 I asked Lance about his motivations and after some evasion, found that he didn't think his character should die. He gave some justification, saying his character was important to the plot. He was the main informant to the detective. This doesn't ring true of course as in a detective thriller like this, any secondary character is liable to get shot and killed. Especially those close to the central character who have already served a purpose.

He also used as a justification that the audience wouldn't want his character to die either, which is true as his character was a likeable rogue. However, as an audience, there are always (important) characters in stories we don't want to die who do die. (Obi Wan Kenobi, Sigourney Weaver in Avatar, Bambi's mother.) They die because the story dictates it. If you are in a film noir, crime thriller or similar, it's highly likely a few incidental and even important characters are going to get knocked off on the way. It's what happens in the genre. And if people dance around avoiding bullets with apparent glee, this is not a noirish thriller it's a Ben Stiller musical. And nobody wants to be in that.

So, in a nutshell, Lance threw the story off track because he didn't want his character to die. When you really get down to it, most reasons for refusing to be killed end up being what that actor wants and not what the story needs. The two core reasons boil down to:
• "I didn't want my character to die because I enjoyed playing him and I didn't want to have to sit on the side for most of the show."
• "I thought I was the hero."

It's clear that there is a strong an element of ego is in both of these. Lance didn't use the latter, but I've heard the same justification in similar situations. But again this is no justification for the above action. He should have realised that when Carl pulled the gun, said very little and shot at him, he didn't seem to think Lance was the central character; otherwise he might have said more. Even if Lance was the central character, he should have dived for cover and dispatched Carl after a shootout rather than goofing off like the actor son of famous comedians.

But we should also remember that central characters do get shot as well. Frequently. And being shot doesn't mean death. And also death doesn't mean exclusion from the story. (I'll deal with this at a later date.) However, if an actor is improvising with too much attention paid to the ego and not enough to the scene, I am reluctant to point out that they can be shot and even die and still carry on, because most of the time, if you are shot as a secondary character, you're dead. And if you are dead, 95% of the time your character is not seen or heard again.

So except for those scant few times, that bullet is going to slam straight through you and death will come soon. Otherwise you are destroying the magic, the reality, the truth (whatever word you want to use) of the story you are telling and throwing an egotistical spanner in the works.

[Please note this article refers to longform (which should only be attempted by players with a few courses under their belt) and open scenes. Beginners should avoid dying, leaving and any other excuse to quit the scene, and many shortform structures will fail if one of the players buggers off.]
Posted by Peter More at 10:00