Shelving, in improv terms, is putting an offer on ice; putting it up on the shelf, out of the way. It's not a block, as you accept the offer. The intention is: "we will deal with this later."

So it is clear there two types of shelving: The first where you accept the offer, shelve it and then bring it back later. The second is where you shelve the offer and forget about it. Technically, this isn't shelving; this is throwing away. 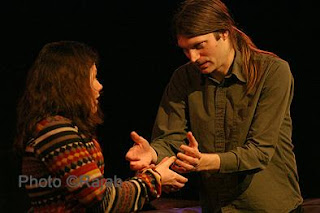 In general, in a short form scene shelving is not worth the effort: the scene will be over in a couple of minutes.

In long form, it is acceptable (as long as you bring it back off the shelf before the end of the scene or show). It's as simple as this: "If you shelve something that is not brought up again, that's pointless and disappointing; if you shelve something that is brought back later one or more times, that's brilliant." Alas there isn't any half-way house. You have to remember.

When you're starting out, shelving is a bad idea. It detracts from the training to make every offer matter, plus with all of the 101 things you have to remember in an improv scene, why add yet another one. Deal with it there, incorporate it and move on with the scene.

Once the laws of improv become more instinctive, remembering things becomes easier and putting an offer aside becomes viable. Shelving, clearly, shouldn't be the standard response to any old offer, So, what functions can it serve?

• If you are in the middle of a dramatic or important moment, a new offer might derail or sidetrack you, force you out of the moment. This offer is probably best shelved to be dealt with later.
E.g. Lady Sally is mourning the loss of her husband and her butler hands her a letter. She thanks him and pockets it. Sure, she could read the letter and it may help project her understanding, but if the actor thinks she doesn't need this catalyst, she can shelve it. As long as later she remembers about the letter or the other actors take this as an offer that Lady Sally has a letter she has received but hasn't read, from which hilarity ensues. [There'll be an entry on the Relative Importance of Offers and Offers from Outside the Scene coming soon.]
• If you think the offer will be best served by being used later, you can shelve it. This could be called the Hitchcockian Offer.
Actor A gives actor B a cigarette lighter. B thanks him and pockets it. Later on the cigarette lighter becomes vital to the story, possibly saving B's life.
• There are too many offers on the table already.
• Running joke or characterisation. Albert walks in and says, "Here's that report." Robert barks, "I said, later!" This illustrates Robert's character or the relationship between Robert and Albert. Also, if Albert comes back in every ten minutes and gets the same response, perhaps with a different item, it becomes a running joke.

You should be very, very wary of shelving anything that is important to the here and now of the scene. I'm just saying once you come of age, impro-wise, had your Ad Libsvah, it is a tool that will help you out in certain situations and add some spice to your longforms. But it must be used wisely. In fact, there is something absolutely vital I have to tell you about this that you must know. But that's for another entry.
Posted by Peter More at 10:58