This blog is mostly my overly analytical thoughts on improv and occasionally opinions on shows I saw or workshops I took. Lately I've been doing a lot more travelling with improv and this side often doesn't get documented because they tend to be very busy times.

I've just spent the weekend in Brussels, the home of Eurocracy and a vibrant English-language performing scene. Certainly, theatre-wise, Brussels seems well served, and improv-wise, there is a growing scene with a couple of overlapping groups at the centre of it.

The first day was a typically, busy international travel day.

It started so early that the mist the Earth sprays over herself to keep from wrinkling was still there. It feels rude to move about the Earth before she's fully awake. The train I got on rolled out of Amsterdam and into the misty Dutch countryside at 7:13. Four trains later (it is usual to do it in less), we were in Brussels.

The fun thing about Brussels is that it is a bilingual city. French and Flemmish are the two tongues that dwell there. Flemmish is like Dutch but ironically using a lot less phlegm. Streets, buildings and maybe even people in Brussels have 2 names. Street signs often have a clever way of showing the name highlighting the common part that is the most important. But there are also streets where the name is not so similar in both languages. A clear example that highlights some of the main differences in the languages, is Boulevard de l'Emperor or Keizerslaan.

Important buildings also have two names. And although people tend to be quite strongly divided by the language they speak, I do wonder if there are are some people who embrace the two-language nature of the land and have two names. eg: Jorgen van den Berg / Georges de la Montagne.

On the train with me was Sacha Hoedemaker, a terrific musical improviser and we were going so early because we had to teach workshops. Sacha on the art of musical improvising and me on movie and TV genres. This is one of my favourite workshops, where we get to grips with the genres the group is interested in or finds particularly difficult. It's a particular favourite because my knowledge of genres, through years of watching and over-analysing films and TV shows is (as the Belgians would put it) encyclopédique / nerdelijk. 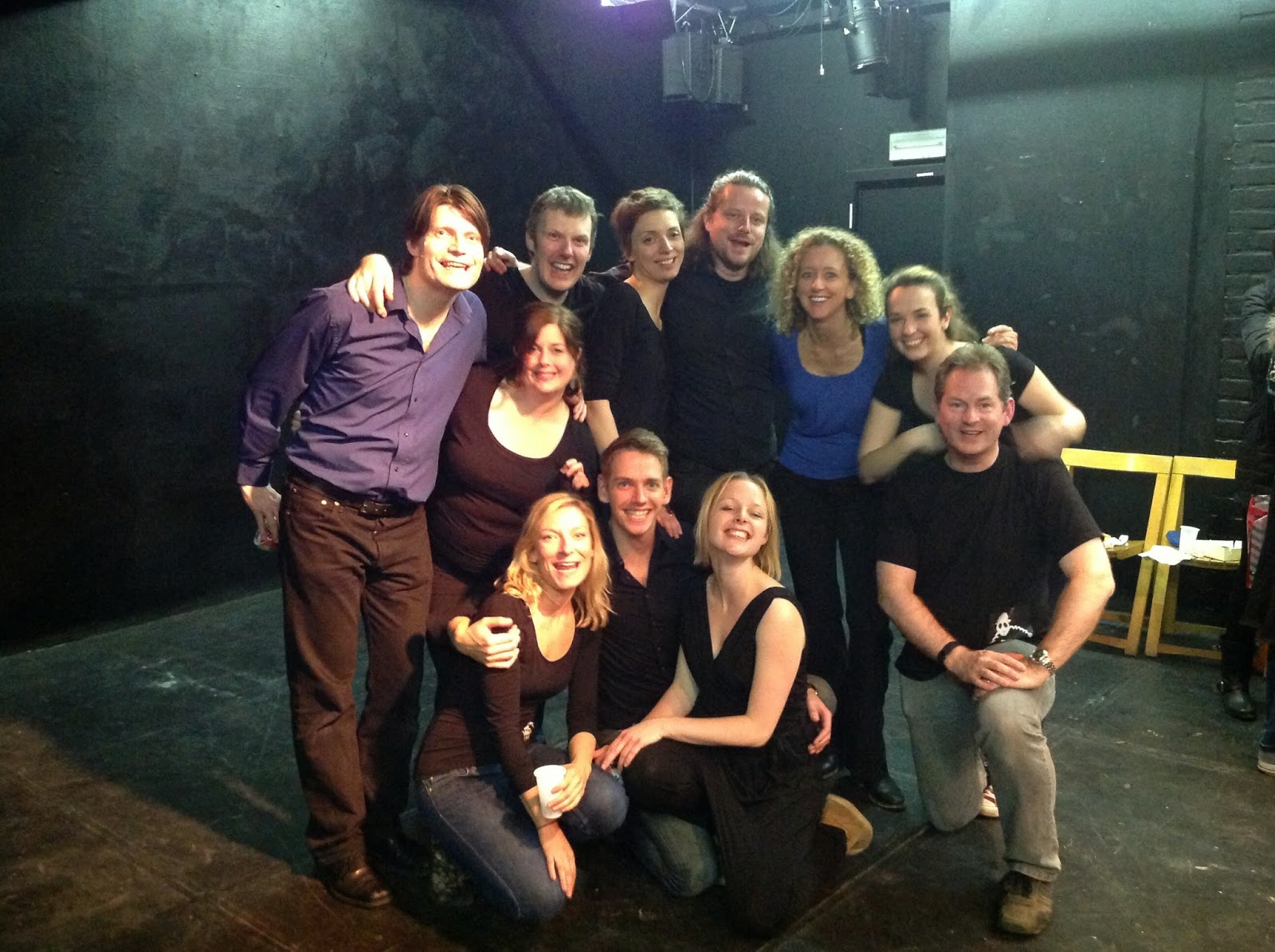 After dinner, it was show-time. I was there with Dizzy and the Pit Kittens, a group formed during one of those gatherings in a bar where four people all realised they'd like to work with each other. We started out exploring allowing scenes to be absurd or abstract. Our original format, Whirlpool, allows scenes to be either of these or also realistic or at least rooted in the real world.

Abstract in improv, we found, often means that rather than accepting physical offers verbally by justifying them and tying them to a real-world activity or by the improv cliché of "oh, yes, you are doing that because..." you justify them by allowing them to be everyday actions of the characters. No matter how ridiculous. We don't explain why the characters are wriggling their arms in the air, we do whatever is necessary to ensure that it seems normal.

Dizzy and the Pit Kittens were in Brussels as guests of The Ghost Sheep, an English-language group, hence only having one name. They are not Les Moutons Fantômes / De Spookschapen. They haven't been together as a group for very long, but they perform quite regularly and are very good at attracting foreign guests to perform and teach, along with other local schemes such as Improv Barter.

They have a couple of theatres they use and seem very good at striking deals with them and other organisations. They are fun and supportive players who seem like a group that's been together much longer than they have. 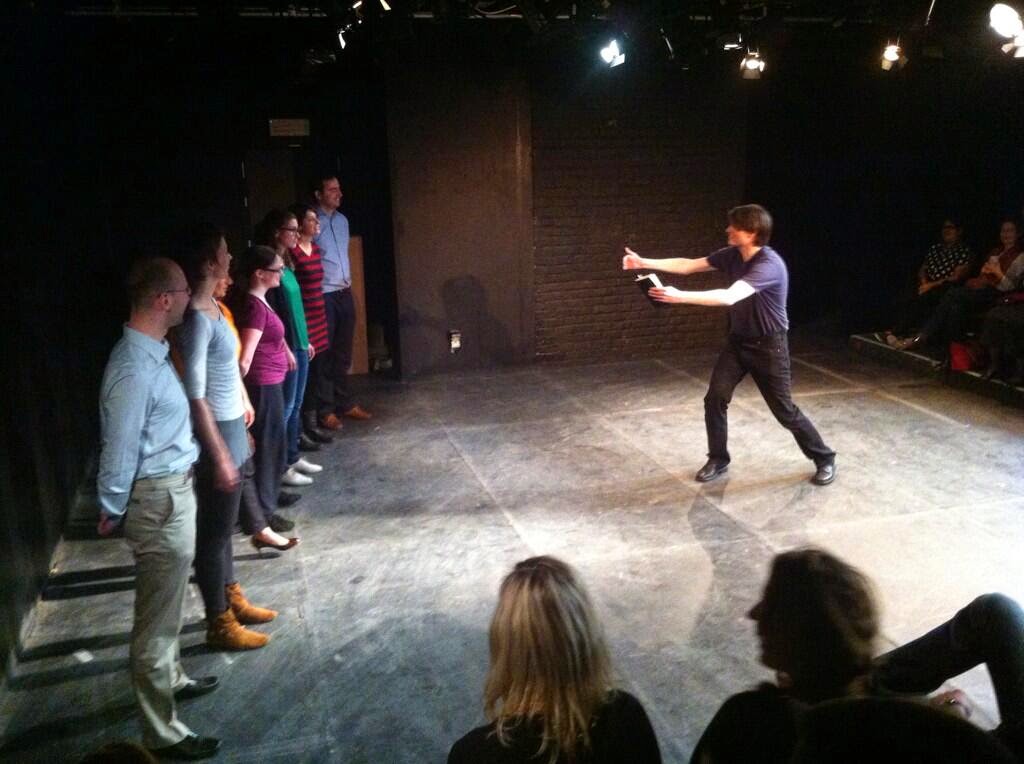 In the second half, Dizzy and the Pit Kittens did their thing. As well as the allowing scenes to be absurd or abstract if they want to be, we have a couple of other conventions. We dance at the beginning to give ourselves starting positions, never leave the stage to allow scenes to flow easily and end with a short recap. Music is quite important to the format and so we made sure we had a great musician with us.

Of course there are people out there who can go straight off to sleep just after a show. Those people don't count me in their number. So, in all, it was a long exhausting day. Fortunately the next one was more restful for me. Other Pit Kittens had to teach, I could lie in and then wander around town.

I've been to Brussels a couple of times before so I've seen the Grote Maarkt / Grand Place and Manneken Pis / Le Petit Julien and the other key things Brussels encourages tourists to see. So my plan was mostly to wonder around bits I hadn't seen, but it wasn't long before I bumped into a small gang of museums. I like museums, but I don't go as often as I like / should. I hadn't planned to go to a museum, but one of the gang members was a Magritte museum. I'm a big fan of René Magritte, or rather, I'd loved a few of the pictures I'd seen by him but knew nothing much about him. In fact I'd assumed he was French, but turns out he was Belgian. So if you like an artist and fate blocks your path with a museum about the him, I'm not sure there is any sort of decision to be made here. Fate says do, you should do. 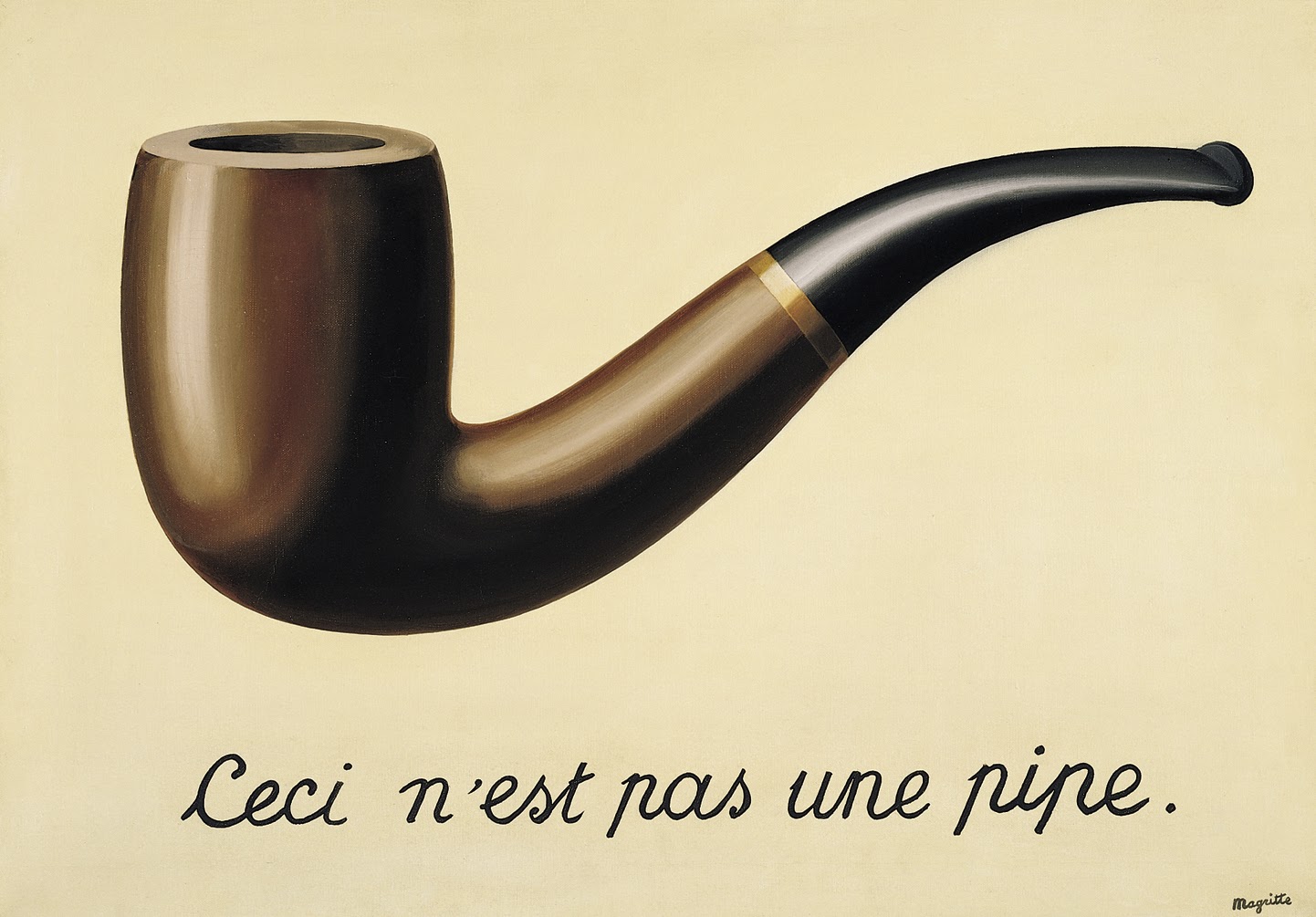 The museum was, as museums tend to be because that's what they intend to be, educational. What I found very interesting was seeing the things Magritte was obsessed with at different stages. The objects, the ideas, the people. He seemed someone who was overly analytical at times, which is no bad thing, I reassure myself. I quite understood his quest to find the connection between objects, the depiction of those objects and the words which represent those objects. I love his playing with and subverting visual expectations and notions of realism, such as covering a the subject's face with an apple and having a night-time scene have a daytime sky. 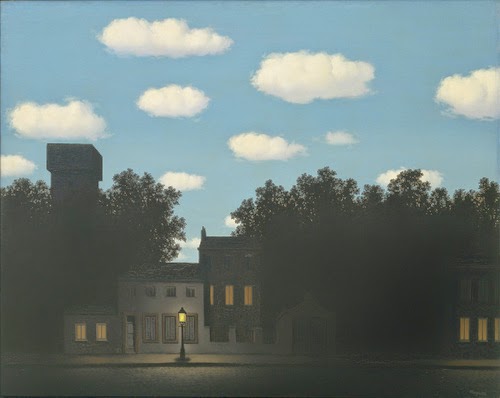 What also fascinated me were how often he would repaint the same picture, with the same elements, but arranged differently, or framed differently and maybe even given a different title. It is also interesting to see how objects that recur in multiple pictures, such as a sphere cut in half, creates something that is not lacking imagination, but somehow fascinating. Like there is a bigger story outside the pictures. 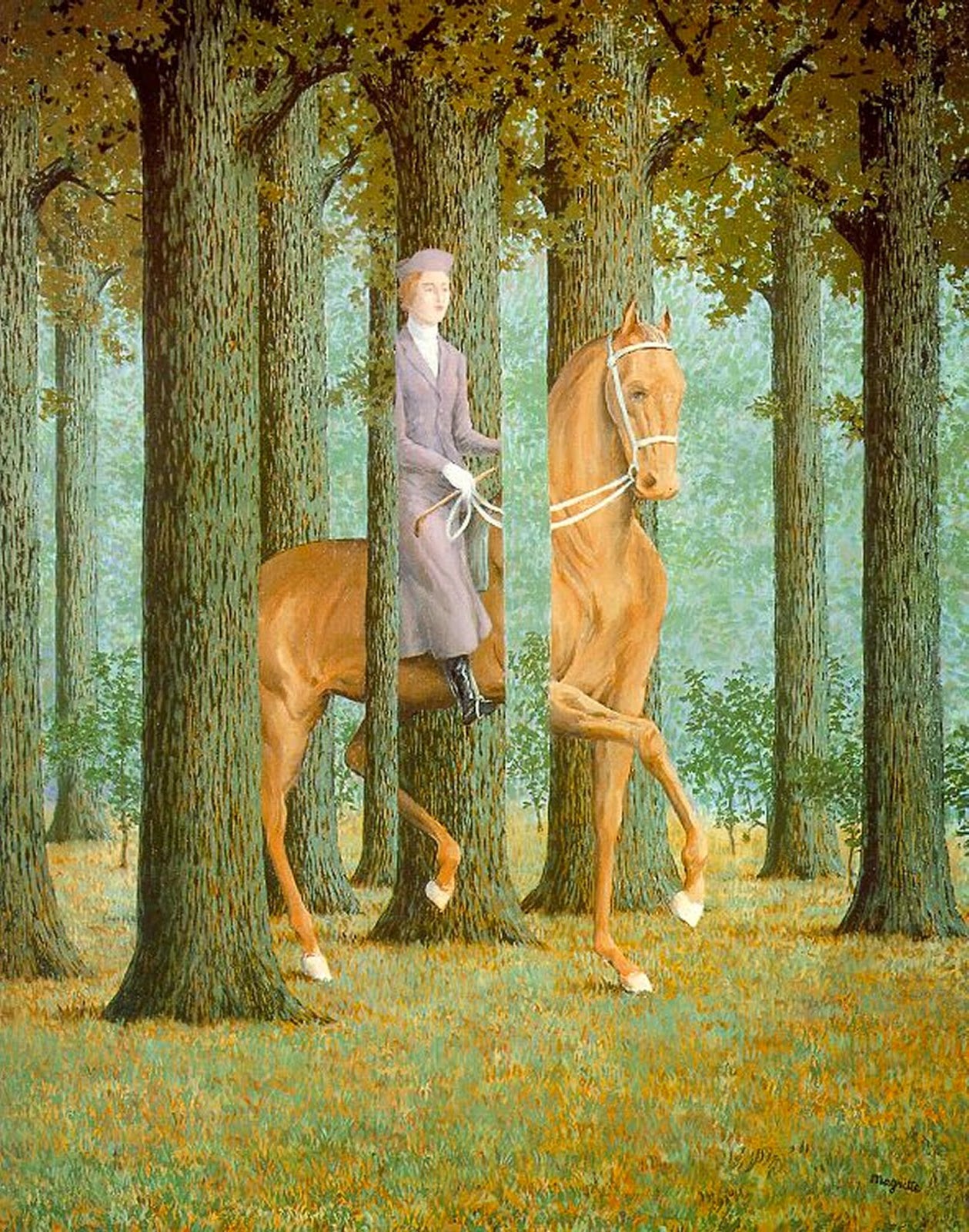 There were a couple of key well-known pictures that didn't seem to be in the collection which was a little disappointing, but if you compare with what was there, it's a minor quibble. One of my favourite things on display were some small sheets of paper depicting strange alien forms entitled Cadaver Exquis. These were created each by 4 artists from one collective - René Magritte, Louis Scutenaire, Irène Hamoir and Paul Nougé - by playing the game many of us have played as children and adults, where a piece of paper is folded and each person draws different segments of the body without being able to see what the others have done. I was so happy that even world-respected artists can still engage in such playfulness and collaboration. 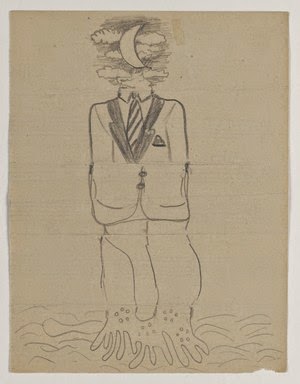 After dinner, there was another show. It started with a demonstration of the dance moves learned by Laura's class and then Dizzy and the Pit Kittens premièred their new format, Octopussy. It's very different to the Whirlpool format being completely about relationships and set very much in the real world. It sees eight characters who are all linked and then brings them all back for a big finale.

The second half was Dizzy and the Pit Kittens joining up with their good friends Les Moutons Fantômes for a good old Superscene, a format where 3 movie directors show you the start of their latest movie and the audience decides who gets to make the next part, with only one getting the chance to finish it.

It was sad to go home. It was good to practice my French, although often I would end up speaking a curious mixture of French and Dutch, but somehow that seemed right.

One day I will tell you why I think Brussels Zuid-Midi station is not really a station but a haunted office block in which the ghosts contrive to make you think it's a station. But that's for the next time. For now I can only once again say a huge "Thank you" everybody involved, in particular the organisers and our hosts, for making the weekend such a great trip and allowing us to get involved in their great scene.
Posted by Peter More at 21:16