When teaching improv, we impress on the actors how important it is to follow through with something. If you say you are going to do something, do it. Do it straight away, before you get distracted by other offers and forget it or before you think too much about it and decide it's not good enough. This goes a long way to reinforcing doing what you say immediately as a central tenet of improv, but it isn't. It's just a good way to reinforce good habits.

So perhaps the real tenet is...

If you set something up to be done, you must do it at some point.

This means it is acceptable to set something up to be done, that doesn't get done immediately, as long as it gets done before the end of the story. How long it takes to get done depends on how important or daunting it is and whether there are steps that need to be done before. Also, sometimes the completion of a particular task will signify the end or beginning of the end of the story, so that's worth holding off from.

A clear example in a lot of shows is some big task that everyone is working towards: the ball, the race, the dance-off, the concert. Something that is important and it's happening will signify the end of the story.

Shakespeare is great at setting up deeds that must be done, and then spending a long time talking about them before they happen. This in improv is discouraged for newbies because this talking about it is usually happening as a way of simply avoiding doing it. In Shakespeare it is done to make the deed seem all the more daunting, and also to learn more about the characters who intend to do it. The scene of weighing up the pros and cons often gives us some of the greatest Shakespearian dialogues and monologues. ("If it were done when 'tis done..." from Macbeth and "To Be or Not To Be" from Hamlet.) 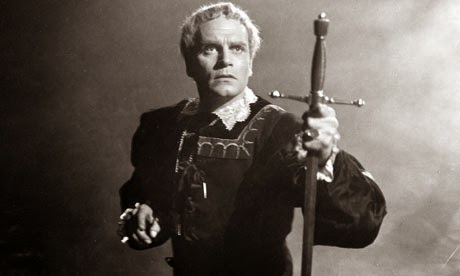 How long you wait to do the thing you set up depends on how important or difficult it is. If you say you are going to clean the car, you are almost certainly better off doing it straight away. If you are going to kill the king, a task which requires a lot of planning, guile and risk, then it's good to really build up that tension and make the act as huge as possible. Compare the anguish Macbeth goes through before killing King Duncan with the following snippet from an improv scene:


Alphabus   "I'm off to kill the king."
Betamus    "Okay."
The king enters. Alphabus stabs the king with a flourish. The king falls to the floor with a face of comedy surprise.

The above is all very amusing and, boy did it cut to the chase, but in terms of drama and making us care about what's going on, it registers somewhere around zero.

Of course, it's much easier to start with, simply doing everything as and when it's set up. You reduce the risk of an offer being forgotten or lost amongst all the other offers, but that doesn't mean you can't take a moment to soliloquise on risks involved before getting down and doing it.

So, in short, delay in doing something can be good, as long as that delay is to build up tension, importance, etc, or to visit other parts of the story or stories. But it's a real tightrope walk because simply delaying something isn't building tension. And simply saying something's important doesn't make it important, you have to show that it is important for the characters.

And it's good to remember we are talking about only a relatively small number of actions.  Generally, most acts that are set up should be done immediately: Stuff needs to happen throughout the story. A few things might be delayed in their execution and thus become important things. But it's still perfectly possible to have a story without delaying an event.

Perhaps it can be best put by paraphrasing the old impro saying, when you encounter the door with the monster behind it, you should open that door, but the door with the scariest monster can be saved until last.