So let's look at our 3 types of monologue in more detail:

Outside the Scene
This is where the actor (as a narrator or character not in the scene) begins, interrupts or ends the scene delivering information to the audience. I can see two main types: 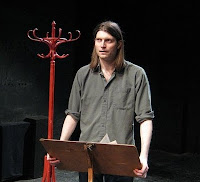 This is where a character in the scene has a monologue. It usually involves one characters taking focus and speaking for longer than normal, totally (or minimally) uninterrupted by the other character(s). They are delivered either partly or directly to the audience. There are two main types based on who the monologue is directed at.

Solo Scene
This is where the whole scene is a monologue. Usually there is just one actor. (Although others can appear to heighten the monologue or be background, perhaps representing the listeners, but have no (or hardly any) lines. Once these background actors to do more than murmur, it starts to become a scene.) Solo Scenes are nearly always delivered to the audience. And then, in most cases, the audience represents the implied second character, the listening group or the character's own reflection. I count three types of Solo Scene:

I don't claim this is exhaustive, but it seems to cover most bases.