There is a fun improv game called “Sex with Me” which explores the extended connections between the act of procreation with a subject the audience deems worthy of comparison. Who am I kidding? It’s a set of sex jokes, puns and innuendo. As I said, it’s great fun.

“Sex with me is like a writing a blog post: You think about it a lot more than you spend actually doing it.”

The game allows me a great introduction to a topic I have thought about since I first started improvising: the connections between sex and improv. (Actually, improv has many of the same similarities with any team sport, but sex is funnier than every sport except curling.)

“Sex with me is like an analogy: two things that seem different come together and are revealed to be more similar than at first thought.”

Apart from the obvious starting with “yes” and the fact they have a similarly addictive quality, there are many ways improv is like sex.

Take the whole shortform / longform argument. Some improvisers prefer the quick payoff of shortform, where it is concluded within a few minutes and there’s hopefully a great payoff at the end, lights out. But others prefer longform. This allows for a longer build-up and a much deeper connection with what’s going on. There is still a payoff, but it’s much more about getting there rather than the moment itself. With shortform, once it’s over, there is sometimes a short rest and then you’re off again, but with longform, once it’s done, that might be it for a week. (Note: performing schedules vary person to person.)

The most common configuration of performers is two people, but scenes of more than two also happen. It becomes trickier when there are more people. Giving focus becomes more important as is gauging when to enter and when to withdraw.

There are also plenty of tools and methods we can use to make our scenes better, if we want. Status – one player taking a more dominant or subservient role; the choices of being more physical or more emotional. Many people embrace playing a character other than yourself. And sometimes it is acceptable to use a gag.

Of course, it’s all about heightening. Start small and build. Build to a peak and end here or soon after.

Joking aside, I think the biggest way improv and sex are very similar are in attitudes to how we play. Sure, if you go into the scene intending that you yourself have fun, it can be a good scene. But when it really works best when you go in with the intention of pleasing your scene partner and they go into it with the intention of pleasing you. That’s when you can make truly amazing scenes.

“Sex with me is like an improv blog: it’s an oddly proud feeling when it’s out there for everyone to see.” 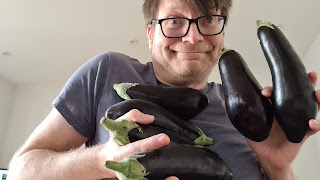 P.S. I realise that all this analogising, I am left with one further inescapable conclusion, that solo improv, something I love doing and like to think I’m pretty good at, is basically wanking.
---
What similarities have I missed?
Posted by Peter More at 20:34