Walk On By: The Subtle Art of Walking On and Walking Off Again

This topic came up as a recent discussion on everyone's favourite data-mining site, facebook. It set my brain off so here's some of its thoughts on the subject.

Before I start properly, I will state that my brain can't decide whether it likes "walk-on" or "walk on." (It already objected to “walkon.”) I'm going for the former as this seems more widely accepted and is clearer in some circumstances. If I offend any grammarians, then I'm am sorry.

I'll start this piece by defining what I mean by the term "walk-on." A walk-on is where an actor goes on stage during a scene and interacts with the scene (usually in a way that adds something) and then leaves. This can either be as a character who enters the scene or as a "director" pointing something out (scene painting, explaining, etc).

It seems simple enough but it's fraught with danger and it can easily become something else. For example, if the actor doesn't leave, it is not a walk-on, they are adding a character. If they walk on and somehow take too much focus from an already established story that didn't require it, this is stealing focus. Walking on to edit a scene I do not consider a walk-on as we are discussing here, it is it's own separate thing.

There is also a walk-through, which is slightly different, but in the same ball park. It's where, for example a couple of characters cross the stage not interacting with the scene itself, although possibly referencing it. Once they actors have crossed the stage, that bit is over. It's like an INSERT in a movie.


Walk-on: Or a short flashback on Family Guy!

Again if the actors start a walk-through, but stay on stage, it becomes a split screen.

99% of the time in a walk-on, the actor physically enters the stage (usually by walking, but not exclusively), but, a voice from off-stage adding some details is also technically a walk-on.

There are several reasons why walk-ons can be a good thing. They mostly come from the fact that actors on the side can have a better overview of the scene / story than the actors in the scene. They can usually better see what a scene needs or what the actors want.

Some reasons to do a walk-on:
Again these things can all be done, but should only be done if they are needed. If you are not sure they are needed, they are probably not. Keep watching the scene and see if something feels missing or needed.


Walk-on: You will spend a lot of your time in improv standing on the sides and watching.

Now a lot of people are wary of walk-ons for some good reasons. Here are some of the pitfalls... 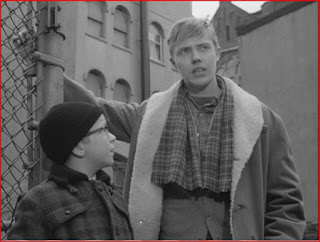 As with all these things, we can analyse them until we are blue in the face, but they only way to really learn the parameters is to do them. Rehearse with your team, practice walk-ons: do a montage-type longform and say beforehand, “we will do as many walk-ons as possible and then see / feel which ones work.” Play games where, say, only new information can be added by players outside the scene. There are more exercises, I'm sure.

And don't be afraid to evaluate and discuss after. "When you walked on during the egg scene, I didn't understand what you were bringing." Don't be afraid to ask yourself or fellow players, "was that needed?" Understand that it is hard to lean the balance of when to go on and when to not, and we will go too far sometimes in our enthusiasm, but that's how we learn. And sometimes it is a matter of opinion. As long as we are open to questioning ourselves and learning we can find that perfect balance point where we only enter a scene when it truly needs it and then, if this is a walk-on, we get the bejesus back off stage.

Quiz for the keen: There were several walk-ons during this piece. Can you determine which were the helpful ones and which were not? There will be a follow-up post with some examples soon.