A little time back, Take One had its premiere. It’s a solo show idea I’d had a good few moons ago. I explained it in an earlier post saying it was less of a format than a concept. Basically, to recreate a movie in a genre given by the audience. In essence it’s nothing new whatsoever. It’s pretty much what 3 For All (and others) have been doing for ages but with one person. In fact, the great Canadian improv nomad, Ryan Millar, came up with an idea which is remarkably similar which premiered the same week.

But although the broad idea is the same with all these groups, the execution of it – the unwritten rules of engagement that you find out during rehearsal and performance, what you ask from the audience, how you use that, how much emphasis you put on furthering the story versus exploring where you are, the devices you use for furthering the story, the archetypes, character types and story arcs you draw from – all these and more – will vary widely for each group and individual. 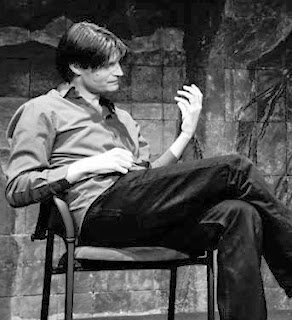 It’s somewhat like the concept that the singer and not the song that makes a song (actually it’s a combination, plus the band is a pretty big help and the producer often invaluable). It makes me think of a thought experiment – I would love to give exactly the same script to 3 wildly different directors and 3 different casts and see how different the films end up being. Very, very different, I’m certain.

For me it’s exciting to find a way of really using all the hours of my life I’ve spent watching movies and obsessing over genres. It’s justified those times I’d stop revising for exams in the middle of the night to watch some obscure classic from 1932 that was being shown at 3 am. (I guess you should expect my next format to be based on Angry Birds or Twitter.)

The first outing of Take One featured, as a warm-up, the orgasm scene from When Harry Met Sally as it would be in an Irish gangster movie and the Ezekiel scene from Pulp Fiction as a Christian Family Cartoon. These worked with varying success but more than proved the concept.

And then the meat of the thing was a time travel disaster movie set in Victorian London with a request for Zombies. I hadn’t intended the genre to have so many elements but the audience was divided and you can’t argue with an audience once you’ve told them it’s up to them. But it worked pretty damn well, if I say so myself.

The next outing will be in January 2014 with a condensed version appearing at the IMPRO Amsterdam 2014 festival (in a double bill with Ryan's format, so you can compare and contrast).

I’ll definitely be doing a lot more of this. I and it are available for festivals, parades and conventions.
Posted by Peter More at 09:20