Welcome to Crazytown, population: 3 blue frogs and a wispy banana 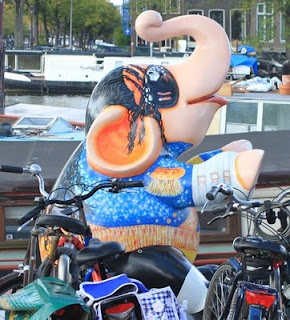 For someone who grew up liking surreal comedy, I find it odd I dislike going to crazytown. Crazytown is that place on Planet Improv where everything is ultra, ultra weird. It's the place a lot of improvisers go when they think the scene isn't funny enough, or they don't trust that the audience wants to see scenes that are about real people and real things. I think I most dislike it because it is easy.
Most improvisers can stand there and list off random, quirky things, one after the other in a stream of conscious non sequiturs. I could do it for about an hour easily, I think.
It's a great tool to have, in the right scenes it can be perfect. But if you find every domestic scene has to have something incongruous like a dancing alligator or a portal to Spandex Hell or an elephant reverberator or unctuous middlemousings or "winding hours of taramasalata," something might be amiss.
I do realise that in improv a spanner in the works sometimes is exactly what the scene needs. But a spanner in every works is quite monotonous.
The harder thing to do in an improv scene is to keep all of the story strands together, keep your character up and play the reality of the scene. That's much harder than to simply become a dancing frog. And believe me, an audience would much rather see a good scene come together with an ending related to the elements of the scene than see a dancing frog. Unless they are six years old of course.
Crazytown is one of the many locations you, as an improviser, can take a scene. And there will be times and scenes where this the place to go. But only go there when the scene demands it. And I do mean the scene, not the performer.
Posted by Peter More at 21:05